Book Review: Hellboy Volume 3 - The Chained Coffin and Others 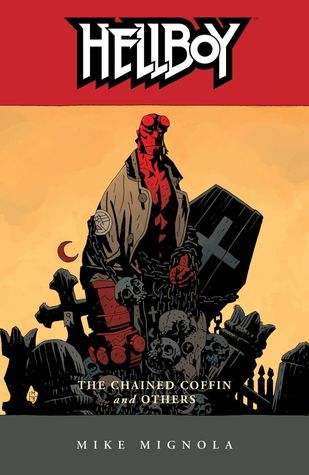 A collection of seven individual stores, one of which, "Almost Colossus", follows up the events that transpired in volume two. With the exception of the last one, the stories are folktales that Mignola has re-worked into the Hellboy mythos. They take place all over Europe, from spooky graveyards to ruins on lonely heaths, from catacombs to abandoned mountain villages.

I liked "The Chained Coffin" and "The Wolves of St. August" as they delved a little into Hellboy's past, revealing the good guy he is at heart. But I didn't care for "The Iron Shoes" and "The Baba Yaga" as they were too short, over before they got started. "The Corpse" was worth a few chuckles, revealing that people can be just as annoying dead as they were when they were alive. "A Christmas Underground" and "Almost Colossus" were ok. The latter was the one story where we're given the POV of someone else, the homunculus from volume two. It fills in the details that Hellboy and the rest of the Bureau for Paranormal Research and Defense (BPRD) were not privy to.

Speaking of the BPRD, Hellboy is joined by Dr. Kate Corrigan for two of these stories. Her role in both stories is to provide background information on the location they're investigating and someone to protect. Although she comes across as a damsel in distress, in reality she's just someone who isn't skilled in paranormal combat.

There were a couple stories where the artwork seemed a little on the sloppy side. I see it mostly in human faces, making them unnecessarily uglier. I also thought the coloration was off in those stories as well. But overall still good, particularly with "The Corpse" and "The Chained Coffin."