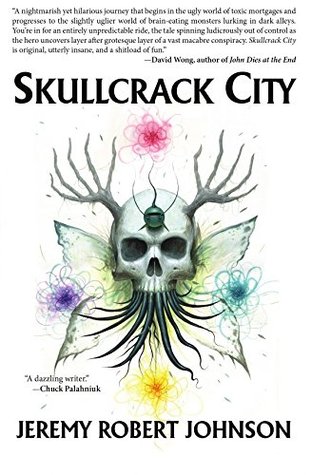 Life as a corporate drone was killing S.P. Doyle, so he decided to bring down the whole corrupt system from the inside. But after discovering something monstrous in the bank's files, he was framed for murder and trapped inside a conspiracy beyond reason.

Now Doyle's doing his best to survive against a nightmare cabal of crooked conglomerates, DNA-doped mutants, drug-addled freak show celebs, experimental surgeons, depraved doomsday cults, and the ultra-bad mojo of a full-blown Hexadrine habit. Joined by his pet turtle Deckard, and Dara, a beautiful missionary with a murderous past, Doyle must find a way to save humankind and fight the terrible truth at the heart of...SKULLCRACK CITY

It's been five years since I read We Live Inside You, JRJ's second collection of short stories. I'd forgotten how much he can get under your skin—I won't go any further with that metaphor. He has this wonderful ability to get you to care about his characters (with exceptions of course), be silent witness to their suffering, and re-assure them that they're still human no matter what.

JRJ's writing style shifts fluidly in Skullcrack City as the protagonist, S.P. Doyle, changes. The Doyle we meet in the Prologue struck me as sinister. He hardly seemed like the guy we were supposed to be rooting for. But then the story proper starts and we meet the Hex-addicted Doyle. The guy is a total mess, spiraling out of control with paranoid fantasies, and it shows up in the narrative. You're not sure what's real and what's hallucination as one sentence runs head on into the next. And just when you think he can't go any further, he crashes as his paranoid fears are confirmed. But we're only a third of the way through the book.

In the middle third, the Hex is purged from his system, but Doyle struggles like a newly hatched chick as his body returns to normal and he awkwardly tries to grow into the would-be hero role. The narrative slows down to a manageable pace with periods of introspection, letting the reader catch their breath. But it's also punctuated by episodes of violence to prevent reader complacency and prod Doyle out of episodes of navel gazing.

In the final third, Doyle is forced to adapt or die. His struggle to survive forces him to shed the awkward persona and stand for something. As certainty of purpose kicks in, a calm settles over Doyle. There's a sense of purpose now. As the world teeters on the edge of insanity and terrible monstrosities, it is Doyle who's now the rational one. We recognize the guy from the Prologue as the story has come full circle.

While this is standalone novel that eliminates any chance of sequels, I'd still like to make a request for more JRJ novels. Please.

This review initially appeared on Goodreads. 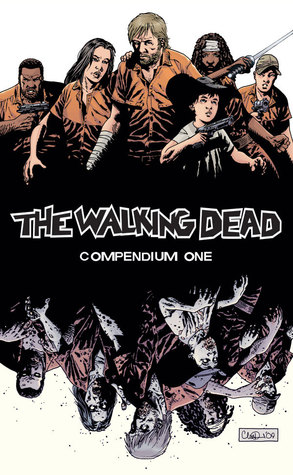 I have never been a fan of zombie fiction, but several years ago, a friend of mine—who is very much into both horror and comics—highly recommended The Walking Dead TV show. My wife and I binge watched season one just before season two came out, and we loved it. Now I knew from watching Talking Dead that the show differed from the comic in several ways, most notably the absence of the Dixon brothers from the comics. But I wondered in what other ways the two differed, so I decided to check out the source material.

Sure, the TV show hits on the main places and events (Rick waking up in the hospital, the camp outside Atlanta, Hershel's Farm, the prison, Woodbury), but the nature of these places, how they're encountered, and the events that play out there are very different.

More drastically though are the differences in the characters. Except for Maggie, Hershel's kids are completely different people. No Beth. Tyrese shows up much earlier, but with a daughter and her boyfriend. No Sasha. And there are characters in the comic that don't exist on the show, though none of them are memorable enough to be missed.

But I'm not just talking about the absence of characters from one world to the other, the characters that exist in both worlds are different. Nearly every character shows some degree of difference, some more than others. I think it's really noticeable with the female characters. If you liked Carol in the TV show, her version in the comics is completely unrecognizable. You probably won't like her, too obsessed with how others perceive her. Lori seems to nag Rick all of the time. Michonne is underdeveloped. Maggie and Glen are ok, but still inferior to their TV versions. Except for Andrea, and to a lesser extent Tyreese, I found that I preferred the TV show version of the characters over the comic. And that goes double for the primary villain here in volume 1: the Governor.

The TV version of the Governor was a far more complex character than the comic version. On the TV show, the Governor is out to woo newcomers and attempts to be a gracious host. He seems to be wrestling with caring for the people of Woodbury while doing terrible things to hold onto power and keeping his secrets hidden. Not so the comic version. The latter was just a maniacal sadist with sick hobbies. Demonstrating why he was such a charismatic figure to the inhabitants of Woodbury, the true source of his strength, seemed more of an afterthought.

So I give the producers of the TV show credit for recognizing the potential here, and I give Kirkman credit for being humble enough to work with other writers as they rearranged and revised the characters and events of his beloved work. I can see why the fans of the comic, who were there from the beginning, don't like what the show has done. However, I'm glad that I watched the show first. Not too sure I need to keep reading the comic.

A slightly shorter version of this review initially appeared on Goodreads.