Book Review: A Princess of Mars 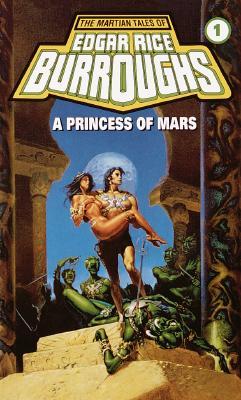 John Carter is out in the American West of the 1880s and, while being chased by bloodthirsty Indians (paraphrasing his description), stumbles into a cave whereupon he's mysteriously teleported to Mars, or Barsoom as the locals call it. He proceeds to have swashbuckling adventures as the planet's lower gravity gives him amazing strength and agility.

My interest in reading this book came from watching Disney's movie interpretation. Other than getting the title wrong, I thought that they did a fine job. My daughter loved it even more than me, particularly for the lovable woola. But I'm going to say something unpopular with the fans of the books: I liked the Disney version more. Blasphemy, you say? Well, here's the thing. This book was written in 1912 in first person diary mode. John Carter writes about how awesome he is at everything—which gets tired real fast—and we know he's never in any real peril as the diary was written years after his adventures, taking away any sense of suspense. The dialogue is weighed down by romantic writing, better suited for yearning hearts on the wastes of Scottish moors. I realize that that was the preferred style of the day, but it suits Poe and Hawthorne far better than the dry and dusty deserts of Mars, chock full of people fighting over dwindling resources.

Speaking ill of the classics is frowned upon. These people were literary pioneers, forging forward into territories no one had dreamt of before, well, published anyway. They inspired millions! For that, I give credit. But the thing is, first isn't necessarily best and doesn't mean the story won't age well. They need help in the modern age. I certainly haven't seen a Western where people talk this way. Look at it another way. Shakespeare's works are timeless, part of the reason is that they take place when, and often where, they were written. I don't see anyone mourning their broken iPhones, saying, "Alas, poor Siri! I knew her, Horatio; an AI of infinite search results, of most excellent fancy; she hath borne me great Yelp reviews a thousand times..."

Plenty of the writers that I enjoy were inspired by Burroughs (Bradbury springs foremost to mind), yet they broke away from stodgy writing to tell their tales in more modern terms using language that has a longer shelf life.

Were there elements that I liked? Sure! But I can't say that there was enough to truly enjoy it. Perhaps, if I'd read it a century ago...