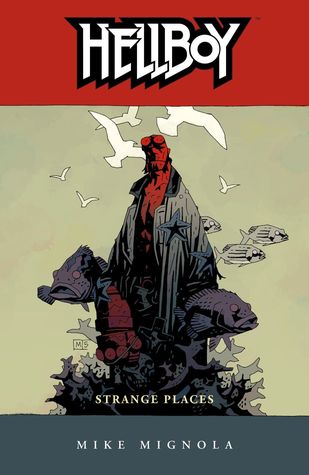 Strange Places contain the stories The Third Wish and The Island.

After the events in Conqueror Worm, Hellboy has quit the BPRD and gone on a walkabout of sorts. The Third Wish finds him in Africa, searching for an ancient witch doctor named Mohlomi. He informs Hellboy that the ocean is calling him and he must go. Meanwhile, three mermaid sisters seeking wishes have come to see the Bog Roosh, a giant fish woman with magical powers. She promises to grant the wishes if they can hammer her magical nail into her enemy's head. Guess who that is.

There isn't the humor that one would normally find in a Hellboy story. In fact, it turns rather melancholic by the end. This one was written shortly after 9/11, and Mignola admits that it may have colored his mood a bit.

After this adventure, Hellboy surfaces for The Island. It is here that a resurrected prophet, reborn from Hellboy's blood, tells him of the origin of the world and his right hand.

Mignola admits to struggling with the story here. The first Hellboy movie was coming out, and he wanted to tell a proper origin story before Hollywood did.

After knocking it out of the park with Conqueror Worm, these two come up a bit short. In The Third Wish we once again have someone trying to kill Hellboy because his destiny is to bring about the end of the world. The Island sees someone trying to force Hellboy to accept his destiny, but if he won't, that someone will do it for him. And there's lots of monologuing, but I'm not sure how else this vast infodump could be presented. But did it need to be done? Couldn't Mignola have just teased out a little here and a little there? Mystery has always a been an important element in this series and now that a huge chunk of it has been revealed, where does this series go?

The artwork for The Third Wish was disappointing. Africa looked dull, and the color palette for the undersea scenes didn't work for me. The Island was better, particularly the color palette, but some of the panels looked a little sloppy. What light you choose to read this by matters a lot. I'd definitely recommend a blue or bluish-white light. Yellow light doesn't work well here. 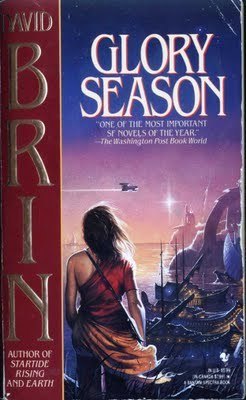 Young Maia is fast approaching a turning point in her life. As a half-caste var, she must leave the clan home of her privileged half sisters and seek her fortune in the world. With her twin sister, Leie, she searches the docks of Port Sanger for an apprenticeship aboard the vessels that sail the trade routes of the Stratoin oceans.

On her far-reaching, perilous journey of discovery, Maia will endure hardship and hunger, imprisonment and loneliness, bloody battles with pirates and separation from her twin. And along the way, she will meet a traveler who has come an unimaginable distance—and who threatens the delicate balance of the Stratoins' carefully maintained, perfect society....

Statoin is a colony founded by feminists who have bioengineered humans to give women the upper hand in their society. This was accomplished by dampening the sex drive in men such that they were only sexually active during summer and enabling a form of parthenogenesis in women during winter. It isn't true parthenogenesis as sperm were still required to initiate embryo development though no genetic material was transferred. Sexual reproduction in summer led to typical offspring as one would expect on Earth, but winter reproduction led to clones. But since the sex drive of men in winter was very low, women needed to coax men into having sex. Thus it forced both sexes to work together in good faith if either side wished to get what they wanted.

It's certainly an intriguing premise with a host of potential storylines, but sadly, it goes to waste.

Brin spends way too much time delving into the main character's thoughts, going on and on for pages as she overthinks situations, dives into flashbacks, or over explains another aspect of her world. To get an idea of the writing style employed, check out Zach's review. By the time Brin gets back to the matter at hand, one could be forgiven for forgetting what was actually happening before the detour. The plot is barely a whisper. We're given hints that something sinister is going on with the world's sexual balance, but then we get pages worth of flashback or world building after which the protagonist moves on.

I'm a fan of Brin. I've read nine works of his and enjoyed all of them. His Uplift books are among my all-time favorites. But this one was a disappointment. I think if this book were about half its size (772 pages), it would be much better. Too much world building and navel gazing and not enough execution of the plot. If you're good with stories that take a really long time to get going, then maybe this one is for you.

Geralt the Witcher—revered and hated—is a man whose magic powers, enhanced by long training and a mysterious elixir, have made him a brilliant fighter and a merciless assassin. Yet he is no ordinary murderer: his targets are the multifarious monsters and vile fiends that ravage the land and attack the innocent.

I watched season one of the Netflix series and thought that this might be a fantasy series worth checking out. I wasn't wrong.

First off, cool looking cover! Like maybe something out of the video games (that I haven't played) inspired by this series. Alas, the scene is not depicted in this book. There are no epic battles here, although Geralt has to fight off some monsters.

Having watched season one of the Netflix series, I recognized a few of the stories that were used to draw up part of the episodes. However, there were some major alterations to what was in the book versus what was seen on the screen. The worst part of the Netflix series was knowing when things were happening. This book didn't help much as only one story, "The Voice of Reason," was current. It was broken up into seven parts with the rest of the stories existing as flashback interludes. After consulting this map and timeline, it would seem that it was a 56-year span, but I digress.

Much has been made of the re-written fairy tales that appear in this book. Suffice it to say that the reinterpretations bear little resemblance to the originals, containing only the most basic elements. While done well, what was more satisfying to me were the elements of humor that were injected into the stories.

This is a character-driven work with each story meant to provide insight into Geralt—his skills, his morals, his outlook on the world. We learn that witchers were once men who were subjected to alchemical experimentation to enable them to fight the monsters of the world. But their collective success has reduced the survivors to mercenary status, traveling from one village to the next, asking, "Hey, ya got any monsters ya need killin'?" We're also introduced to Yennefer the Sorceress and Jaskier Dandelion the Bard. Both challenge Geralt in some way. Jaskier is a foil to Geralt's dour disposition while Yennefer's strength attracts him, forcing him to deal with...feelings.

One interesting thing to note is that in all but one of the flashback stories, women are the antagonists. While a couple were actual monsters, the other times they were just strong women. That's not to say that Sapkowski was expressing misogyny. Each of the three women had been dealt a rough hand in life and had to be tougher than their circumstances just to survive. Some people resent that, prefering women to be submissive no matter the circumstances. As such, they're unfairly demonized. Sapkowski puts Geralt into a confrontation with each of them, and he must negotiate his way through these encounters to see the truth. He isn't always successful.

Worldbuilding was scarce. Sure there were plenty of references to monsters that inhabited the places Geralt was visiting, but they were just lists of names, most of which carried no weight. Places were obscure with no explanation for where they were in the world. Did it matter? No, I guess not, but the randomness of it all left me feeling rudderless.