Book Review: A Song for Quiet 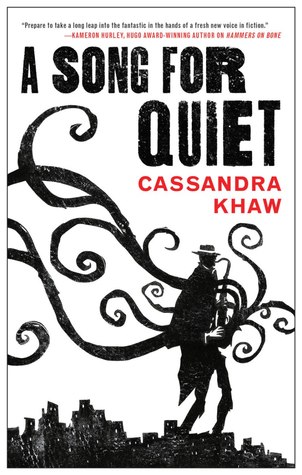 Deacon James is a rambling bluesman straight from Georgia, a black man with troubles that he can't escape, and music that won't let him go. On a train to Arkham, he meets trouble — visions of nightmares, gaping mouths and grasping tendrils, and a madman who calls himself John Persons. According to the stranger, Deacon is carrying a seed in his head, a thing that will destroy the world if he lets it hatch.

This story really could've been something. The blues mixed with Lovecraft. Definite potential.

We meet Deacon James while he's riding a train to Arkham, famed fictional city of Lovecraft's. Between his recent past and this quote, I connected with him right off the bat.

Deacon looks up as civilization robs the night of its endlessness, finger painting globs of light and farmhouses across the countryside.

I was thinking that this might've been an update to Lovecraft's "The Music of Erich Zahn."

Raw, unevenly syncopated, the music's a clatter of droning notes, looping into themselves, like a man mumbling a prayer.
...
No trace of the blues, no ghost of folk music, not even the wine-drunk laughter of big-city jazz or the thunder of gospel. Only a hard lump of yearning that snags like fishbones in his throat as he plays, plays, plays, improvisation, frantically straining to wrench the bassline into familiar waters.

But then the story ran into problems. First off, Deacon himself. He struggled to carry the story. He got off to a great start, but then spent the rest of the story running in fear. I didn't need an action hero, but I wanted him to either confront his emotional burden or make a feint towards dealing with the social injustices he regularly encountered. His actions at the climax of the story might've been perceived that way, but it could also be perceived as surrender. I can't say anything more without spoiling it.

And the way Khaw handled him when he first encountered Ana seemed abrupt. There was no parley, no interpersonal recon. He instantly bonded with her as if she were a long lost daughter. That isn't hyperbole.

I was disappointed that Khaw didn't make use of Arkham besides name dropping. There's nothing in the story that really made use of it. This could be set in Anytown, USA, circa 1950.

I really liked Persons in the first book, but here he's pushed into a supporting role. While his narration in the first book could be a bit much at times, it always lent itself to the story. Maybe this book should've been published first with Persons' minor role serving as an introduction to the character, piquing the reader's interest to learn more.

In Hammers on Bone, Khaw used noir and metaphors to set the scene and help build the story towards its climax. But here the noir was replaced by a wall of purple prose. It was wonderful at times ("cutlery scraping over crockery"), as the above quotes hint at, but then it became repetitive. Later, it meandered like so much jazz improvisation that I lost all sense of what was going on. I had to re-read parts a couple of times, scrutinize sentences, to piece together what was actually happening, find some semblance of structure. It was there though, buried beneath a lovely purple blur.

The resolution proved unsatisfying, so all I was left with was a bunch of lovely prose. So, 2.5 stars because I needed more.