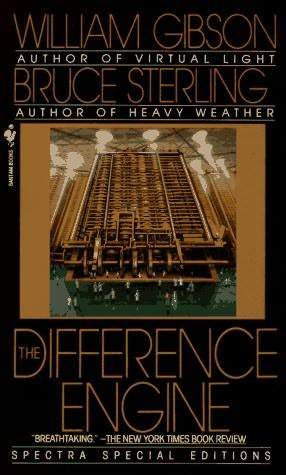 1855: The Industrial Revolution is in full and inexorable swing, powered by steam-driven cybernetic Engines. Charles Babbage perfects his Analytical Engine and the computer age arrives a century ahead of its time. And three extraordinary characters race toward a rendezvous with history—and the future: Sybil Gerard—dishonored woman and daughter of a Luddite agitator; Edward "Leviathan" Mallory—explorer and paleontologist; Laurence Oliphant—diplomat and spy. Their adventure begins with the discovery of a box of punched Engine cards of unknown origin and purpose. Cards someone wants badly enough to kill for...

TL;DR version: Gibson and Sterling combined their skills to craft an exquisitely detailed world, but failed to come up with a story worthy of the setting.

Ugh! What a disappointment! I should've just abandoned this early on. I kept going with it, hoping that somewhere along the way it would improve, but it didn't. I can't believe that these two put all this effort into creating this world—every, and I do mean every, single detail gets some kind of mention even if it's a list of items on a table or how each and every single person is dressed—but forgot to write a cohesive storyline. The world itself requires some suspension of disbelief, but that isn't the problem here. The storytelling is the problem.

The blurb informs us that we have three main characters in this book. But don't assume that their stories are told co-currently or are entwined in such a way as to reach a dramatic climax. Their stories are told one at a time, but they don't flow into one another. In fact, they seem like they could've been three different ideas for how this novel could've been approached. Rather than picking one or finding a way to tie them together, they're just carelessly pasted into the manuscript.

Sybil is up first. He story slowly builds up to a dramatic conflict and then she fades off the stage, with only a fleeting encounter with the McGuffin (the box of punched Engine cards), and we're told that she spends her days from here out in Paris.

Mallory is up next. Early on, he stumbles into the McGuffin after a brief altercation with a thug at the racetrack. Said thug turns out to be Mallory's antagonist and later develops offstage into some kind of Moriarty-type villain. Meanwhile, Mallory puts the McGuffin somewhere safe and we don't hear of it again. We're introduced to Oliphant, whose purpose seems to be to warn Mallory that he's messing with some serious people, but Mallory...I don't know where his head is. He seems to be incredulous all the time that these things are happening. His story climaxes during the "Great Stink," a real eco-disaster. Then Mallory's story is done and we're told how he dies decades hence.

Finally, Oliphant takes control of the narrative. He's investigating something and lets it be known that Mallory is over in China digging up fossils. We kinda learn the fate of the McGuffin and Oliphant is off to Paris to recruit Sybil into taking down a politically dangerous man whom she has a personal vendetta against. And then that's it; Oliphant's story is done. The story ends with a whimper.

The last thirty pages of the book are a collection of narrative chunks of various topics that amount to nothing more than discarded bits of backstory, character development, and storyline. Did they not know how to weave this into the story, or is it filler to bump up the page count?

All-in-all, a complete waste of time, unless you're researching a steampunk setting and need help with the details.