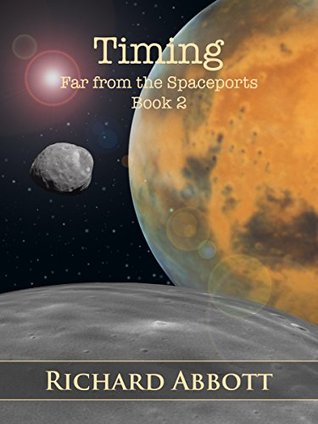 When quick wits and loyalty are put to the test...

Mitnash and his AI companion Slate, coders and investigators of interplanetary fraud, are at work again in Timing, the sequel to Far from the Spaceports.

This time their travels take them from Jupiter to Mars, chasing a small-scale scam which seems a waste of their time. Then the case escalates dramatically into threats and extortion. Robin's Rebels, a new player in the game, is determined to bring down the financial world, and Slate's fellow AIs are the targets. Will Slate be the next victim?

The clues lead them back to the asteroid belt, and to their friends on the Scilly Isles. The next attack will be here, and Mitnash and Slate must put themselves in the line of fire. To solve the case, they need to team up with an old adversary - the only person this far from Earth who has the necessary skills to help them. But can they trust somebody who keeps their own agenda so well hidden?

It was good to get back to Abbott's Far from the Spaceports series. In the first book, we're introduced to Mitnash and his AI companion, Slate. They work for the financial regulatory body ECRB (Economic Crime Review Board) and are periodically sent off-world to investigate financial shenanigans. I found Abbott's world-building solid and his take on AI refreshing (full review here).

This book adds more of the travelogue aspect of this series. Abbott sends his duo to Phobos and Mars before their return to the Scilly Isles, a cluster of settlements in the asteroid belt that was the setting for the first book. Abbott provides more detail on life on Phobos, demonstrating how the geology of the fragile moon has shaped the culture of the settlements there.

Abbott also delves more into the characters' relationships. Mitnash struggles with maintaining a long distance relationship (astronomical units!) while a local woman intrigues him. And it's not just Mitnash's relationships, but Slate's as well. I don't know how we'll imbue emotion into AIs, but in Abbott's universe, it happened and each AI has a unique personality. With their consciousness capable of living the human equivalent of decades in a fraction of the time, they seek out relationships with other AIs, hoping for a match. Mitnash is put into a situation where he has to consider that Slate's feelings are no less valid than his.

While the story remains non-violent, save for a couple of off-camera incidents, Abbott manages to build tension, primarily through the "old adversary" mentioned in the blurb. Mitnash is slowly learning that life (on multiple fronts) is seldom as simple and straightforward as it seems. There are complications during the investigation, and Mitnash finds himself in a predicament that isn't easily remedied and will hang over his head as his story continues.

4.2 out of 5 stars. I'm looking forward to the next book in the series.

It took me longer than expected to finish this book. The delay had nothing to do with the quality of the material, rather most nights I was too tired from the day's activities to read more than a page. Details forthcoming when I have time for a lengthy post.