I confess that the cover for my 2010 novel, Armistice Day, looks dated. It was the best cover I could commission back then. I have no regrets about it (My regrets only pertain to my lack of publishing, but that's another matter).

These days, one's dollar goes so much farther as accessibility to high quality pre-made covers has greatly improved and the price for commissioned book covers has come down. Yes, there's still garbage out there, but the market has improved by so much.

In the days ahead, I'll be posting the new look for Armistice Day.

In other news, I've now launched a Facebook page for my writing news. Marketing, cross promotion, yadda yadda yadda. But if you already read this blog, there really won't be anything there that isn't posted here. I have plenty of complaints about Facebook's content, but I'm also not a fan of the layout/interface. But that's where everyone is so what choice do I have? 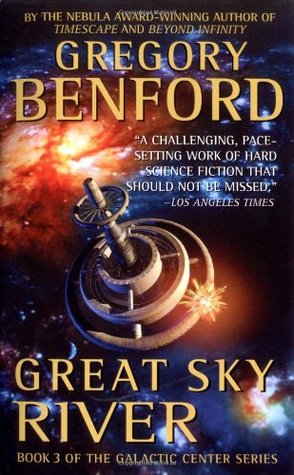 According to the timeline in the back of my copy of the book, 35,000 years have passed since the events in Across the Sea of Suns. The survivors of that book were joined by expeditions from Earth in the central region of the Milky Way. Humanity enjoyed a second Renaissance that lasted thousands of years, but it ultimately caught the attention of the Mechanicals, who proceeded to methodically fight a war of attrition against them. Six years ago on the planet Snowglade, where this story takes place, the Mechanicals overwhelmed the Citadels and forced the survivors into a nomadic lifestyle, feeding off the scraps of the fringes of Mechanicals' civilization.

The humans on Snowglade are augmented, their bodies implanted with and connected to so many cybernetic parts that they're vulnerable to electromagnetic attacks and computer virus infections. To compound the problem, the humans on Snowglade have been regressing over the centuries. They've become so dependent on their technology to do everything for them that they no longer possess the knowledge to create anything new. Sure, they can fix some things, but they typically don't seem to be much more than cybernetic cavemen. They can't even understand the information that appears in their HUDs. Distant dead ancestors were digitized, and its every adult survivor's responsibility to carry their share of these personalities around with them in their personal computer memory. But rather than make the most of the knowledge that these digital ancestors still retain, they're often brushed aside because they're annoying.

The story is told from the POV of Killeen, a member of the Bishop family (tribe). His father and wife died when their citadel was destroyed. His son, Toby, is all he cares about now. We witness the raids on Mechanicals' manufacturing outposts and attacks on the family by Marauder machines through his eyes. He comes to realize that the nature of the attacks is changing. There's a machine out there that possesses a cunning, ruthless intelligence that is unlike any Marauder. He names it the Mantis.

The Mantis has taken a perverse interest in humanity, and it is up to Killeen and his tribe to figure out its motives.

Benford has made some dramatic improvements in this series. First off, the arrogant protagonist of the first two novels, Nigel Walmsley, has been pushed into the historical record. Secondly, but no less important, female characters are finally treated as equals. Fanny is the captain of the Bishop tribe at the onset of the story, and Killeen greatly respects her leadership. Shibo is a survivor from another tribe who impresses Killeen with her knowledge and skill. No damsel in distress here.

The dialogue took some getting used to. Benford grants the Snowglade denizens a dialect that comprises several slang words and new terms ("yeasay", "suredead", "mechtalk", etc.) and modifies their grammar to help craft an image of them as hillbillies. That's not meant to be an insult.

There are some scenes in the lair of the Mantis that appear to be inspired by H.R. Giger. In many of his works, Giger blended humans and animals with machines to create disturbing biomechanoid images (the creature in the movie Alien being his most famous work). Benford puts his own spin on the concept. Whether or not the descriptions will disturb the reader is up to said reader's ability to visualize what Benford writes. I give him points for the effort.

While not a reboot of the series, Benford in effect wipes the proverbial slate clean. With a new protagonist and solid supporting cast of characters, the Galactic Center saga takes on a fresh new look. 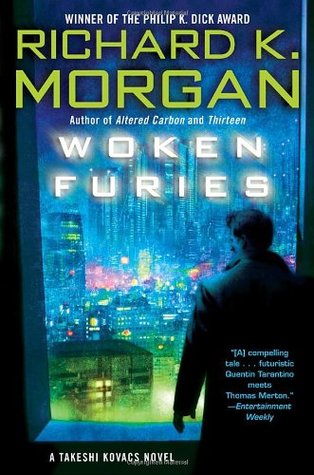 In a world where real and virtual are one and the same and the dead can come back to life, Takeshi Kovacs was once a galaxy-hopping Envoy. Now he battles against biomachines gone wild, searches for a centuries-old missing weapons system, and endures the betrayal of people he once trusted. But when his relationship with an imperiled woman pits him against an enemy specially designed to destroy him, he knows it's time to be afraid. After all, the guy sent to kill him is himself: only younger, stronger, and straight out of hell.

When we reunite with Kovacs, we find him back on Harlan's World, the place of his birth. He's hunting priests of a local patriarchal religion—Knights of the New Revelation—in a damaged synthetic sleeve, but we don't know why. After the events in Broken Angels, it seemed like Kovacs was done with the mercenary life. But things spiral out of control pretty fast. Soon Kovacs is so hot from pissing off the New Revelation crowd and the Yakuza that he's in the outback fighting rogue biomachines with a local mercenary outfit. That's his way of laying low.

After re-sleeving, he learns that a centuries-old backup version of himself has been illegally acquired by the planet's ruling family and is on the hunt for him and Sylvie, the tech-head leader of the mercenary group. She apparently caught a computer virus and has been steadily getting worse. They split off from her merc band and hide somewhere else. That doesn't go well either, and now Kovacs is hanging out with some surfers looking to get the revolutionary band back together again.

There's also stuff dealing with the Envoys, the lethal Martian orbital stations, and Quellcrist Falconer—the long dead philosopher leader of a rebellion three centuries ago. Confused? Yeah, I was too. However, I can assure you that by the end of the book, the convoluted plot and storylines all make sense. The pieces start to come together midway through when Kovacs finally explains why he's hunting down priests. I'm not going to spoil it for you, but I'll give you a hint: It's not business; it's personal.

Kovacs has learned the hard way that you can't go home again. He's been gone too long. Places are familiar, yet different. People change; friendships falter. As for ideologies: "Meet the new boss, same as the old boss." Kovacs is angry at everyone and everything, especially himself. The internal dialogues with himself reveal a level of inner conflict that wasn't present in the previous two novels. A particularly cathartic moment comes when he's forced to fight the younger version of himself. The younger Kovacs is highly critical of the choices that the elder Kovacs has made in his life. Nearing exhaustion from all of the mental and physical battles, he responds, "You know what, let's see you do it better."

But before we get there, we have to endure a whole lot of aimless wandering, a lot of misplaced anger, too many disposable minor characters, questionable sexual choices (and graphic sex scenes that neither reveal hidden plot clues nor develop character), and one betrayal after another (What happened to all that Envoy intuition?). There was little in the way of rewards along this journey, and the end payoff was a bit lacking. With the success of the Netflix adaptation of Altered Carbon, Morgan has hinted that he's thinking about revisiting Kovacs. If it means a better send off for the character, I hope so.