As a kid, I naturally took to books. Way back in the 70s, the internet was still the province of the Defense Department and a few select universities, our phones didn't do anything more than ring, and computers were these massive monoliths that didn't do much besides crunch a few numbers. Sure there was TV, but we only had 13 channels. The only real medium to feed your imagination was books.

Despite my best efforts, my son lost interest in books after several years. He blamed school for forcing him to read dull books. My daughter made a decent attempt at it, but I could tell I was losing her to games and social media.

This was disheartening and completely unacceptable. I wanted them to read more, but I didn't want to make it seem like a chore. After years of failed attempts to persuade them to read more, I made the rather draconian move to institute "reading night." One night per week, the family would gather in a room and read for an hour. My wife had my back, so my iron fist of literacy wouldn't break.

There was resistance at first, but when I explained that I didn't care what was read, they decided to test me on it. Graphic novels were brought out, but I didn't say a word. In fact, I engaged them afterwards about what they read. I even picked up books from them after they'd read them, and when I finished, I talked to them about them.

Nowadays, my kids actually look forward to reading night. One of them will remind me, and if we missed our regular day, they'll insist we make it up. And this summer my son got a job at our local Barnes & Noble (yes, they still exist). This morning he let me know about a sale that was going on soon and mentioned a book that he thought that we'd both be interested in.

While this victory may be a small one for me, I feel that the true winners are my kids.

Email ThisBlogThis!Share to TwitterShare to FacebookShare to Pinterest
Labels: musings

In a corporate-dominated spacefaring future, planetary missions must be approved and supplied by the Company. Exploratory teams are accompanied by Company-supplied security androids, for their own safety.

But in a society where contracts are awarded to the lowest bidder, safety isn’t a primary concern.

On a distant planet, a team of scientists are conducting surface tests, shadowed by their Company-supplied ‘droid—a self-aware SecUnit that has hacked its own governor module, and refers to itself (though never out loud) as “Murderbot.” Scornful of humans, all it really wants is to be left alone long enough to figure out who it is.

But when a neighboring mission goes dark, it's up to the scientists and their Murderbot to get to the truth.

As it says in the blurb, Murderbot hacked its governor module—for those not mechanically inclined, think of it as a choke collar. While it follows its orders so that it isn't discovered and risk getting scrapped, it has the freedom to ignore commands it doesn't want to carry out or just pretend to carry them out. It doesn't want to talk about its feelings or hang out with the human crew. It wants to spend as much free time as possible watching thousands of hours of entertainment media it downloaded. Introverts everywhere will identify with Murderbot and quite possibly want its weapons complement to keep pesky annoyances at bay.

The novella is told entirely from Murderbot's POV, but it is perceptive enough to gauge others' reactions to it. And the internal dialogue is full of plenty biting humor that I guffawed audibly several times, eliciting curious inquiries from my family.

Being part-organic, Murderbot isn't invincible either. Although the company has built them to be self-repairing, they are disposable to some extent. Murderbot's vulnerability is made obvious to the reader from the outset. But despite this, Murderbot doesn't hesitate to throw itself into danger. Is its programming overriding self-preservation, or does it actually have a smidge of empathy for the humans it's assigned to protect? That's up to the reader to figure out. 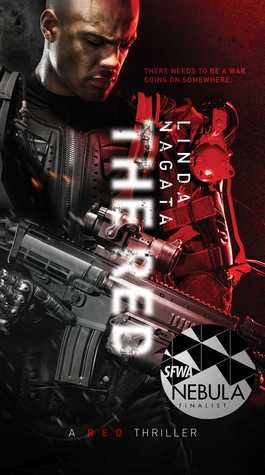 Lieutenant James Shelley, who has an uncanny knack for premeditating danger, leads a squad of advanced US Army military tasked with enforcing the peace around a conflict in sub-Saharan Africa. The squad members are linked wirelessly 24/7 to themselves and a central intelligence that guides them via drone relay—and unbeknownst to Shelley and his team, they are being recorded for a reality TV show.

When an airstrike almost destroys their outpost, a plot begins to unravel that's worthy of Crichton and Clancy's best. The conflict soon involves rogue defense contractors, corrupt US politicians, and homegrown terrorists who possess nuclear bombs. Soon Shelley must accept that the helpful warnings in his head could be AI. But what is the cost of serving its agenda?

Back in my indie book reviewer days, I'd heard that this book was originally self-published before it was picked up by Saga Press (Simon & Schuster). Then the accolades poured in, and the story garnered three award nominations. So I made a note to pick it up once I had the chance. Now, having read it, I can see why. The writing is tight and polished. The opening hook grabs you ("There needs to be a war going on somewhere...") and pulls you in, the action is well-choreographed, and there's plenty of dramatic tension.

The military jargon and procedural actions ring true. The gear is well thought out and frickin' cool. Nagata provides mid-21st century soldiers with powered exoskeletons, "skullcap" computer interfaces that send signals to the body to adjust biochemical responses to the surrounding environment, and implants to connect with weapons and recon drones.

The story starts in the Sahel, and I enjoyed the way it unfolded, but then, in a major plot twist, Shelley gets injured and the story shifts stateside to focus on his recovery and rehabilitation. The time in the hospital gives him a chance to reconnect with his former lover, his father, and the journalist who fatefully led to his army recruitment. We learn more of Shelley's past and the dystopian world (similar to our own) he lives in. We also learn that there appears to be an AI that's gone rogue (The Red). It's intentions are unknown, but it seems very interested in Shelley.

I would've thought that a military thriller with cyberpunk elements would've been everything I needed here, but it didn't pan out. So what's the problem? Quite simply, me. The book had me hooked at the start, but then it lost me with the setting change. Developed characters were suddenly lost, irrelevant to the overall story. The pace slowed way down, too. I cut it some slack, feeling that Nagata was ramping things up for this new direction, but then the plot radically changed course again. The confrontation I expected was pushed back to another novel. I couldn't get on board with the new course.

As well written as the story was, I couldn't connect to it. I felt like I was reading the script to the Rock's next action movie. Once Nagata described Shelley, I couldn't not picture him in the lead. And that's fine. I think he's incredibly talented for a particular genre of films, and I've enjoyed every one that I've seen him in. It's just that Mr. Johnson's movies aren't something I want to read.