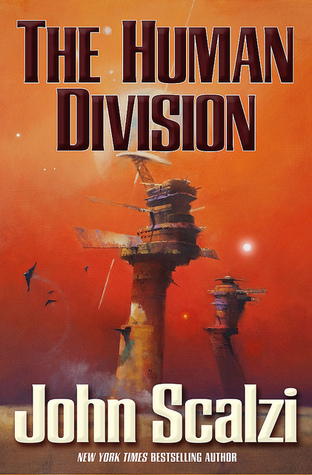 Following the events of The Last Colony, John Scalzi tells the story of the fight to maintain the unity of the human race.

The people of Earth now know that the human Colonial Union has kept them ignorant of the dangerous universe around them. For generations the CU had defended humanity against hostile aliens, deliberately keeping Earth an ignorant backwater and a source of military recruits. Now the CU's secrets are known to all. Other alien races have come on the scene and formed a new alliance—an alliance against the Colonial Union. And they've invited the people of Earth to join them. For a shaken and betrayed Earth, the choice isn't obvious or easy.

Against such possibilities, managing the survival of the Colonial Union won't be easy, either. It will take diplomatic finesse, political cunning...and a brilliant "B Team," centered on the resourceful Lieutenant Harry Wilson, that can be deployed to deal with the unpredictable and unexpected things the universe throws at you when you're struggling to preserve the unity of the human race.

This book is actually a collection of serial episodes that were initially released online. I didn't read them when they were released as I was taking a break from Scalzi. I'm glad that I waited for them to be bundled together as that works better for me. While each story is self-contained, strung together they apply to a larger storyline: Who is behind the effort to destroy the Colonial Union's efforts to reunite with Earth and get along with its neighbors? [Highlight to read SPOILER] Unfortunately, the answer to that question isn't in this book. [END SPOILER]

The stories are primarily about the work of the "B Team", a diplomat, her retinue, the ship's captain and crew, and their CDF technical liaison, Lt. Harry Wilson. If you read Old Man's War, he was one of John Perry's buddies. During their adventures, they discover evidence of the larger storyline, but as they try to piece together the clues or climb out of the trap about to spring on them, they always seem to be a step or two behind their adversary.

A few other stories served as background for the reader, but were always relevant to the main storyline. These tended to be darker, a juxtaposition to the B Team's typical "we've stepped in it now" attitude in the face of adversity.

I have to say that I've missed the effortless way that Scalzi can carry a story and develop characters with dialogue. Humor is a big part of that. Good-natured snarky pokes at their jobs or the situations that they're in makes them relatable and thus endearing to this reader. But there's a lot of heart as well. The main characters are good people forced to work in difficult situations with lives at stake, theirs or others. If you're in it up to your neck, there's no time for whining. You just have to do your job and hope that it all works out in the end. When the shit hit the fan in the climactic episode, I couldn't help but care about who made it out alive. And that's an important lesson for all writers, if you want people to come back and read your stories, you'd better give them some characters to root for. 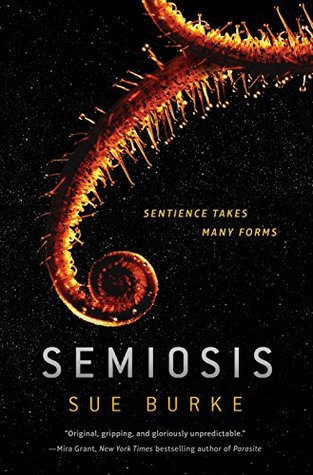 In this character driven novel of first contact by debut author Sue Burke, human survival hinges on a bizarre alliance.

Only mutual communication can forge an alliance with the planet's sentient species and prove that mammals are more than tools.

Forced to land on a planet they aren't prepared for, human colonists rely on their limited resources to survive. The planet provides a lush but inexplicable landscape—trees offer edible, addictive fruit one day and poison the next, while the ruins of an alien race are found entwined in the roots of a strange plant. Conflicts between generations arise as they struggle to understand one another and grapple with an unknowable alien intellect.

The book is broken up into seven sections, each with a different narrator from a different generation. Roughly thirty to forty years pass between the first four. The remaining story is told over the span of a couple years. The initial gaps between sections affords the colony a chance to develop and set the stage for the major plot development hinted at early on in the story. For that reason, I didn't mind the gaps, though I regretted seeing a couple of these characters go.

The first section details the arrival of the colonists and the early days of their settlement. Octavo was the narrator, and I rooted for him to solve the colony's initial problems. They were off to a bad start: A navigation error sent them to the wrong planet, and a botched landing destroyed a good chunk of their equipment and supplies. After several deaths, he figures out that the colonists are pawns in a war between two plants. The irony is dispiriting after fleeing an Earth overwhelmed by war and environmental collapse.

But things didn't get any better in section two. Sylvia narrates how the colony leadership, now made up of the few remaining colonists from the first generation, has resorted to rape, murder, and intimidation to maintain control. Burke's colonists named their world Pax. It's another sledgehammer's worth of irony.

These two sections of the book were so bleak that, after finishing them, I had to take a break from the book. While I liked the two narrators, I wasn't too sure about the rest of the colony. When I returned to it, things looked less bleak, but I still didn't care about the colonists and the narrators varied in likeability.

By the time I finished section five I was convinced that Burke didn't like these people either. She beat the crap out of the idealistic first generation only to have them turn bitter, embracing the despotic tactics of the very people that they fled from Earth to keep dissenters and their children in line. A couple of generations later and the colonists are mostly annoying, dirty hippies. In a major encounter, Burke sets them up to fail, crushing the idealism out of the narrator and his like-minded compatriots.

The idea of sentient plants made for an intriguing premise, but I found myself with more questions than answers. The major plant character rattles off its very detailed knowledge of organic chemistry, but no explanation is offered as to how it came to acquire said knowledge. There are no plant schools, nor any surviving members of its kind to pass on this knowledge. I inhale air into my lungs, extract the oxygen molecules, push them through my alveoli into my bloodstream, extract carbon dioxide from blood vessels, and exhale that gas. Not only do I not have to consciously think about doing this, but without the education I've received, a lifetime of breathing would not impart that knowledge to me. Does the plant somehow see or taste—or whatever the botanical equivalent is here—the molecules? I could accept that if offered as an explanation. If I could see molecules, after several millenia of existence, I'm sure that even I could've performed much better in my organic chemistry class.

After finishing this, I'm left to wonder what Burke is trying to say here. Is this a friendly warning that while solving Earth's problems is hard, running away to colonize other worlds is no easier? Is she cynically saying that no matter where people go, whatever their idealistic intentions, they're going to screw things up?

To summarize, great world building but a bleak narrative with cynical messaging and very few characters worth rooting for.

I finally seem to have made enough progress processing my father's death that I'm able to write again. Obviously the real world events of 2020 didn't help to move things along. While terrible things are still going on, it seems that on a personal level I've been able to turn the page.

Over the summer, I was inspired by a status update I saw on Goodreads to write this short story. The idea rattled around my brain, but I wasn't able to write it up until the week after Christmas. It's titled "Staking Sunflowers". It's 2,100 words long and has sci-fi and horror elements in it.

My wife and kids read it and gave their approval. A reading group on Goodreads has given it positive reviews, too. After a few edits, including tacking on a darker ending, I've started reviewing markets that it might work for. First submission and rejection happened yesterday, so I must keep looking. In the meantime, now that it's out of my head, I can get back to working on Gateway.