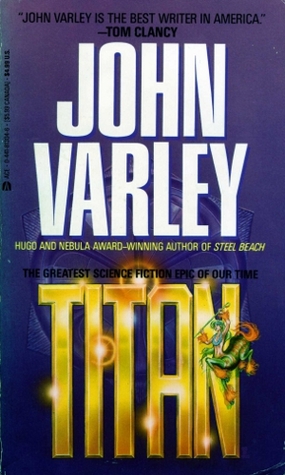 The first manned expedition to Saturn discovers a new moon, but closer examination reveals it to be a huge space station.

All kidding aside, the station is in the shape of a Stanford torus, albeit a thousand times larger. Attempts to dock with the station go horribly wrong for Captain Cirocco Jones and her crew. Stranded on the station, they have no choice but to find who's in charge in hopes of finding a way back to Earth.

Titan was published in 1979 and is the first book in John Varley's Gaea trilogy. I didn't find out that this was a series until after I'd read the third book, Demon. During the 80s, I'd joined a science fiction book club that sold hardcovers for paperback prices. Demon was one of the books I bought along with Varley's standalone Millennium. I enjoyed both, but I didn't find my way back to this series until recently when I'd heard that Varley was having heart surgery. But I digress.

At first blush, Varley's space station comes across as another Big Dumb Object (BDO). I admit to being a sucker for this type of story. Ringworld, Rama, the Halo videogame, etc. In BDO stories, exploration of the BDO is often the story itself. Cirocco's search for her crew runs parallel to her exploration of this strange new, and manufactured, world. But Varley's BDO has more going on that just a bunch of humans poking around in a sterile alien vessel or the ruins of an advanced civilization. Fantastic alien creatures are met. The sentient ones have a unique culture and speak of Gaea, the entity in charge. And so, Cirocco sets off on a quest to find Gaea, whether Gaea is an alien, a committee, or computer.

Varley was one of the few men in sci-fi that wrote strong female protagonists in the 70s. Cirocco Jones is the first woman to command a NASA mission, and the pressure of it weighs on her, though I wish that it had been explored a bit further. Instead, Varley explores sexual freedom among his characters. Bearing in mind that this was written in the 70s, Varley imagines that on long space missions, the crew will likely pursue sexual relationships because that's what people do. Details are light, just enough to give the reader an idea of what's going on. Once on the space station, Varely takes things a step further, not just among the crew but the aliens as well. With regards to the crew, non-binary relationships are explored. Among the aliens, the titanides have multiple sex organs, so keeping their genders sorted out would probably require a spreadsheet.

Personal transformation is another theme explored by Varley. Each of the crew go through some sort of change once they're on the station. While some changes are benign, like suddenly knowing how to communicate with the various alien species, others are darker. Certain aspects of one's personality are magnified. A loner finds herself transformed into one of the alien species who lead a solitary, predatory existence. Another finds his toxic masculinity magnified, leading him to become a rapist (again details are fortunately kept brief). No one in the crew is untouched, and how they respond to adversity under these circumstances is itself a transformative event.

Titan is all about discovery: a new world to explore, new life forms to interact with, self-discovery among the characters. I'll admit that sometimes the story bogs down in the space station details. I felt that Varley had to satisfy the gearheads by throwing out specifications about the place to justify how and why it works. While the place is wondrous, sometimes the wonder wore off with the minutiae. And the quest itself seemed rather long with rather little to offer the reader between momentous encounters. But the payoff in the end was worth it. What Jones discovers about Gaea is far from expected for just a BDO.