No, not really. It's just a coincidence that the #1 social networking outlet went into decline shortly after I joined up. It's also very much alive, albeit largely irrelevant in the social media landscape, as a music and entertainment platform.

I resisted joining for years, but I finally gave in to peer pressure. While I was connecting with obscure indie metal bands, scandals rocked the platform. It was labelled a "vortex of perversion" after sensationalized stories of teen sex, drugs, and kidnapping surfaced, reinforced by unsavory ads that everyone could see regardless of age and "moral standing." Throw in technical difficulties and the platform quickly hemorrhaged users. If you want, you can read a thorough story here.

MySpace was displaced by Facebook, and the rest is history.

I'm still not on Facebook. Why? So many reasons, but they can be categorized into two camps: the politics of personal relationships and Facebook's use of my data. I think both are pretty self-explanatory, but I'll elaborate.

The politics of personal relationships requires that I friend people who I don't like or don't really connect with in real life. And then I have to like things that they post like "sitting on the couch with a bag of Doritos watching TV" or "here are 32 pictures of my kid". Some people don't understand the concept of oversharing. In either case, if I don't play along, I'm a dick. When I see them in person, I then have to explain why I didn't "like" their post or refused their friend request. Makes for some really awkward times. I much prefer to be polite and keep my interactions with them in small doses.

If that makes me seem like a jerk, I'll accept that. But one should bear in my mind, that politeness in uncomfortable situations keeps things civil. Human history is rife with violence. The polite veneer of civility helps us all get along, but it can be exhausting. Do I really need to play this game with people who overshare? Do we really need more drama?

Facebook uses its members' data to make money. Nothing is off limits. It seems like people are just waking up to this. The counter argument is that you can't something for nothing. Yeah, I get that. I'd pay a reasonable subscription for a social media platform (I already pay for my website) where I had full control over how my data was used. But nothing sells like FREE.

I'll spare you the whole fake news crap that surfaced during the last election. Like I want to have a page of lies clogging up my screen.

So why am I considering joining? Because nearly everyone is on there! That isn't hyperbole: 40 million businesses, 2 billion people. Start up companies (breweries come to mind) forego having websites in favor of a Facebook page due to cost and simplicity. But even mature businesses have a presence on Facebook to drum up interest and will use it to handle their communications.

As an indie author, I need to find ways to reach out to people. Websites and blogs are just islands in the vast sea of the internet. Facebook is a continent. If you don't have some connection, you won't necessarily die, but you won't flourish either. If one person likes something, it shows up in their feed, which their friends see. Some might actually follow up and see what their friend liked. Such is the power of the network.

I've tried two other social media platforms (besides MySpace), but neither compares to the Pangaea of Facebook.

Google+ is fine, but its activity is tepid. Yes, I realize that Google is using my data, but I'm careful about what I share. Also, I haven't had any of the liking pressure. Of course, nearly no one I know uses it. I keep wondering when Alphabet is going to pull the plug on it.

Goodreads is a haven for bookworms. Its defined structure means I don't have to worry about drowning in cat videos. Again, no pressure to like someone's review or update. But maybe that's because I don't have a big network of people I connect with there. That's not to say it doesn't have issues, but I haven't had a problem avoiding them. It also offers authors a means to self-promote. I haven't taken full advantage of them yet, but plan to once I finish Gateway to Empire. Maybe that will be enough, but I'm inclined to think not.

But maybe this angst is all for naught. There's anecdotal evidence that Facebook usage is in decline. By the time I get around to joining it, maybe all of its issues will have finally caught up to it and send the company down into a death spiral. I don't think so. It's too big to fail, and there aren't any real alternatives. Unless there's an anti-social media movement where we downplay the importance of its role in our lives, I don't see that happening.

So I guess I'd better get ready to like a lot of cat videos and baby pictures. 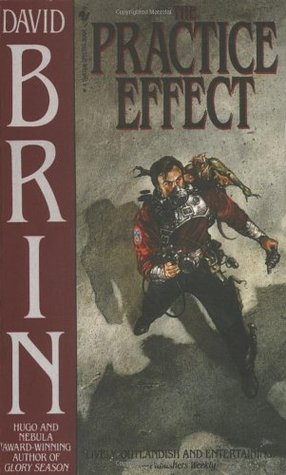 Physicist Dennis Nuel is the first human to probe the strange realms called anomaly worlds: alternate universes where the laws of science are unpredictably changed. But the world Dennis discovers seems almost like our own—with one perplexing difference. To his astonishment, he’s hailed as a wizard, meets a beautiful woman with strange powers, and finds himself fighting a mysterious warlord as he struggles to solve the riddle of this baffling world.

While this novel is couched as sci-fi, it reads like fantasy. Sure, the beginning of the novel takes place in a near future Earth, and there's the zievatron thingee that allows Nuel to travel to another world, but it ends there. The rest of the novel is spent in a medieval world, and Nuel must put his wits to use inventing things to gain favor and the upper hand in his struggles with the denizens of this world. There's a princess who needs rescuing, castles and dungeons, and superstitious peasants.

So what is "the practice effect?" Well, you know how you have to practice playing the clarinet to learn a song or get on the ice and skate to improve your hockey skills (maybe not the best examples, but you should get my point)? On this world, that's how you make objects better. The more you use them as they're intended, the better they get. Got a pair of ripped jeans? Wear them a lot and let them practice being jeans and those rips will go away. Got a crude stone axe? Go chop some wood with it, and it'll slowly sharpen on its own accord.

If you remember physics class, you'll know which law has been turned on its head to make worn out things magically like new. Just another element to bolster the case for this being a fantasy novel.

90+% of the story is told from Nuel's POV. Fortunately that 10% exists as it affords the reader a chance to learn that the villainous Baron and Princess Linnora aren't two-dimensional stock characters. The Baron is greedy and lusts for power, but he does have a few principles. It was especially nice to see that, while the princess was in need of rescuing, she carried her own weight as the novel wore on.

None of this is said to infer that this is a bad book. It's definitely not. I enjoyed it. The pacing is good, and the story is entertaining. The characters are fine, though they could've used a little more depth. They're likable, you still root for them to succeed. The story could've devolved into one of those stereotypical square-jawed male heroic fantasy tropes that were so popular decades ago, but it didn't. Not Brin's best work, but still fun. 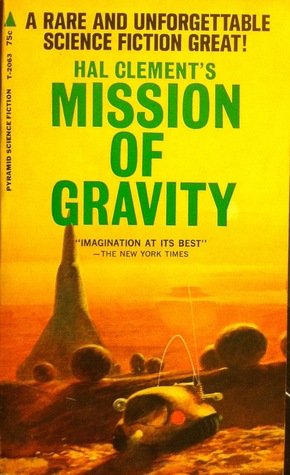 Clement's world building is the highlight of this sci-fi classic from 1954. Mesklin is a large, disc-shaped world that spins so fast that days are only 18 minutes long. Gravity runs from 3 G at the equator to 700 G at the poles. It is a world of liquid methane seas and ammonia snow. The humans have special environmental suits to protect them from the hostile atmosphere and tanks to get around, provided they stay close to the equator. And yet there's sentient life: 15 inch-long centipede-like beings who are in the early stages of civilization.

And that's the high point of this book.

Characterization is flat. Even the aliens show very little depth, behaving very much like their human counterparts. Interactions between Barlennan, the local Meskinite captain, and Lackland, his human contact, are rather easy. Lackland taught Barlennan English (before the story begins) and except for the occasional idiom or scientific concept, there is little lost in translation. The most interesting part is that the humans and Barlennan's trade group work together to solve problems rather than trying to kill one another.

Science fiction doesn't really age well. Unforeseen technological advances (Computers!) and cultural progression trip up most stories. While the technological hiccups here are few and easy enough to skip over (slide rule, film projector reel), and there isn't any cultural baggage, the writing style is stuck in the time period from when it was written. It's stale. Conversations are all business. The prose is stark, all too objective. It's the Asteroids video game equivalent of literature, with far fewer explosions.

The story is a very linear progression from one encounter to another as the Mesklinites journey from the equator, where they encountered to the south pole of their world to retrieve very expensive equipment from an incapacitated human rocket. It's as much a mission of exploration for the north pole dwelling Barlennan as it is for the visiting humans (though they're keeping an eye on the action via a radio). Unfortunately, we drown in minutiae, both travelogue and mathematical. At times, it seems as if Clement has written this story for boys yearning for careers in science. "Look lads, you can have all sorts of adventures if you study hard!"

It isn't bad, but it isn't terribly exciting either.