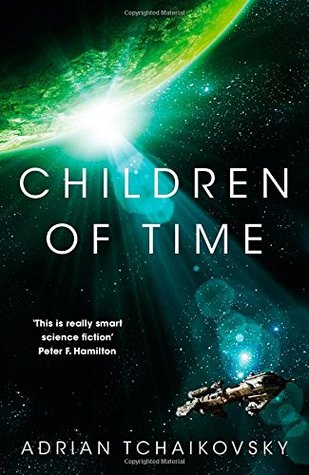 The epic story of humanity's battle for survival on a terraformed planet.

Who will inherit this new Earth? The last remnants of the human race left a dying Earth, desperate to find a new home among the stars. Following in the footsteps of their ancestors, they discover the greatest treasure of the past age – a world terraformed and prepared for human life.

But all is not right in this new Eden. In the long years since the planet was abandoned, the work of its architects has borne disastrous fruit. The planet is not waiting for them, pristine and unoccupied. New masters have turned it from a refuge into mankind's worst nightmare.

Now two civilizations are on a collision course, both testing the boundaries of what they will do to survive. As the fate of humanity hangs in the balance, who are the true heirs of this new Earth?

The "disastrous fruit" are sentient spiders, ok. Let's get that out of the way right now otherwise this review becomes difficult to write. And this book has been out for five years, so the spoiler window has long been smashed.

There are two storylines here: the spiders and their struggle to evolve from their animalistic origins—thanks to a genetically engineered nanovirus—to building a civilization and human refugees fleeing an ecologically ruined Earth. When telling the story of the spiders, Tchaikovsky adopts the voice of nature documentary narrator as he highlights pivotal moments in spider evolution, biological and cultural. The spiders get names, although these are recycled. Once they're capable of communication, the narration takes a back seat to their conversations. While never abandoning their spiderness, Tchaikovsky imbues the spiders with individual identities, making for reasonably sympathetic characters regardless of one's level of arachnophobia.

Tchaikovsky isn't the first author to craft a sentient spider civilization. One previous story that I've read was A Deepness in the Sky by Vernor Vinge. I read it 15 years ago and don't have a review to refer back to so the details are a bit fuzzy. It was a different first contact story, the spider civilization being something that evolved on its own and the humans visiting their world were there as traders, not colonists. In that book, you saw the spider civilization through their eyes, and it seemed to me like the characters were a bit too humanized with their speech. However, I enjoyed their storyline over the humans. Much like this book.

The human storyline is told through Mason Holsten, the ark ship's "classicist", something of a historian/linguist. He seems disdained by most of the "key crew" as being useless until his skills are needed, and even then he fails to gain much favor, save some grudging respect from the ship's chief engineer, Isa Lain—their relationship was the highlight of the human storyline. The humans spend most of their time in cryosleep as crawling across the galaxy at roughly 1% the speed of light takes a while. Holsten goes in and out of cryosleep over the ship's millennia of travel and witnesses dramatic changes in the ship's personnel with each waking. We're forced to share his disorientation while he gets up to speed. I had some difficulty with him being the protagonist of the human storyline. While I didn't need him to be heroic, I needed a little more moral backbone from him. And maybe some common sense too. He could really be befuddled at times. But while he wasn't the protagonist I wanted, maybe he was the protagonist the human storyline needed.

The "hard choices" that the humans make throughout their storyline really had me rooting for the spiders. I think that was Tchaikovsky's intent. Root for the creepy crawly things because maybe they'll make the right choices because humans really don't seem to know how to do it as they keep making the same mistakes over and over. There are times when Tchaikovsky really drives home this point, offering us a warning that we are really screwing up the planet and ourselves with our behavior.

Initially, I was suspicious of how the ending came together, but after re-reading the points the author made in the narrative through one of the spiders, it made sense. There was a pattern to how the spiders conducted themselves in times of conflict. The final battle between spiders and humans was no different really. That consistency of behavior made it work for me. I think it's hard for us as human beings, the fallible creatures that we are, to accept such an outcome from creatures that we too easily view as monsters. But since we view our own kind as monsters, is it really that surprising?

If there had been some tiny bead present in the brain of all humans, that had told each other, They are like you; that had drawn some thin silk thread of empathy, person-to-person, in a planet-wide net—what might have happened?