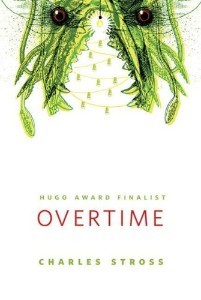 Stross runs Christmas through the Laundry. Who's coming down the chimney? Is it Santa Claus? Heh. If you know Stross's Laundry-verse, you know the answer.

Bob forgot to put in for time off for the holidays (too busy recovering from the events in The Fuller Memorandum), so he's forced to work Christmas Eve as the Night Duty Officer. In essence, he's there to field any calls that come in regarding extra-dimensional nasties. We endure the limited budget office Christmas party, complete with a guest speaker by the name of Dr. Kringle, and walk with Bob as he patrols the spooky almost-Escher office building.

Recommended for Laundry-verse completists. Better than "Down on the Farm" but not as good (or as scary as) as "Equoid."

Be sure to save room for the mince pies.

Email ThisBlogThis!Share to TwitterShare to FacebookShare to Pinterest
Labels: book review, The Laundry

When I started this blog, I'd intended it to be a PR feed for all things pertaining to my writing career. I didn't have any illusions that progress was going to be so great that this was going to be a "must watch" space, but I'd hoped for a bit more than it has been. Life has a way of throwing up roadblocks and detours. Let's leave it at that for now.

The blog feed link is a nice feature on Goodreads. It lets authors keep fans updated without having to remember to cross post. But I really haven't been doing that. What this space has become is a repository of book reviews in case something goes awry with Goodreads. I post little else. I have conflicting ideas about privacy versus self-promotion. I also don't want to repeat the mistakes I made with my first blog.

Since my blog feeds into Goodreads, anyone following me there sees double of my book reviews in their feed. That could be perceived as annoying. So I'm disconnecting my blog from Goodreads. This will be the last post that appears there. If I've got something to say that isn't a book review and want it posted there, I'll just use the "general update" feature or their built-in blog.

On the social media front, I'm transitioning from Google+ to Facebook. It's still in the early stages. I have to study what other authors have done in separating the professional from the personal. I'm not posting a link from this blog to Facebook until I'm 100% ready to go. I realize that could be never.

I haven't ruled out other social media platforms, but besides finding the right fit, network size is a major factor in determining if it's worth the effort. At this stage of the game, I'm still unknown enough that I haven't ventured beyond square one. When Gateway is finished (currently about 50%), I'll have more of an impetus to drive social media and marketing. Right now, it's not worth the time or effort. 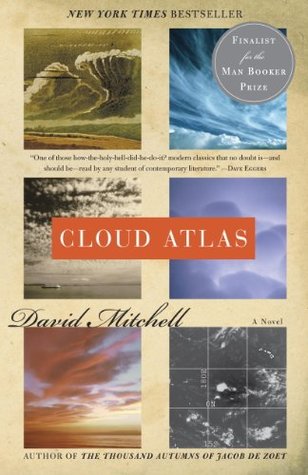 Cloud Atlas begins in 1850 with Adam Ewing, an American notary voyaging from the Chatham Isles to his home in California. Along the way, Ewing is befriended by a physician, Dr. Goose, who begins to treat him for a rare species of brain parasite... Abruptly, the action jumps to Belgium in 1931, where Robert Frobisher, a disinherited bisexual composer, contrives his way into the household of an infirm maestro who has a beguiling wife and a nubile daughter... From there we jump to the West Coast in the 1970s and a troubled reporter named Luisa Rey, who stumbles upon a web of corporate greed and murder that threatens to claim her life... And onward, with dazzling virtuosity, to an inglorious present-day England; to a Korean superstate of the near future where neocapitalism has run amok; and, finally, to a post-apocalyptic Iron Age Hawaii in the last days of history.

But the story doesn't end even there. The narrative then boomerangs back through centuries and space, returning by the same route, in reverse, to its starting point. Along the way, Mitchell reveals how his disparate characters connect, how their fates intertwine, and how their souls drift across time like clouds across the sky.

A frustrating read. While there were parts that were clever, other parts were irritating and annoying. In the end, I was left unsatisfied. Clearly, I'm in the minority on this one, but I will endeavor to explain why.

The book takes a nested narrative structure, a bit like the dream diving within dreams scenes in Inception (or the "Lawnmower Dog" episode of Rick & Morty), but with different characters. We get the first half of each story and then proceed on to the next until the sixth story, whereupon the order is reversed until the end. In essence, they were cliffhangers with varying levels of intensity. This was annoying. Not only did I have to wait hundreds of pages to resume the earlier stories, but each transition into the new story felt like I was starting over. And on the resumption of the stories, I had to go back to the first halves to recall some of the characters and plot points. The first half of the first story ended so abruptly—mid-sentence—that I thought I had a corrupted file on my Kindle!

Each story is told with a different style. We have journal entries, personal letters, a standard mystery thriller manuscript, a fourth wall breakdown, an interview, and a campfire tale. Each story is referenced by the one that comes after it, while clever, it opens up a potentially fatal flaw. The fourth story refers to the third as being fiction, but with all the references to the two preceding stories, I'm left wondering how much that story's "author" made up and what she incorporated from the "real" world of this novel. I have too many questions and to properly ask them would be spoilers.

I appreciated the changing of the narrator's voice from one story to the next. There was a good deal of playing around with language, too. You've got Victorian English in Adam Ewing's journal. The letters are written with Frobisher's shorthand abbreviations, formal continental vocabulary stocked with antique words, and sprinkled with French and Latin. After the two contemporary stories, Mitchell subjects language to further modifications. Our Korean tale is filled with shortened words, the phonetic spellings taking over (ex- to x-, -ight to -ite). And with it being a corporate dictatorship, brand names are substituted for everyday words (ford for car, nikes for shoes). But I absolutely hated the Huckleberry Finn dialogue style used for the last story. While certainly a possible outcome, it made the last story practically unreadable for me.

The characters, while they were all unique, were a mixed bag. I had trouble making a connection with or caring about most of them. Sonmi and Luisa Rey were the two I rooted for (honorable mentions to Sixsmith and Napier). Frobisher was a foppish fool at first, but improved with time. Ewing was dreadful. Don't get me started on Zachry. Cavendish was the worst. He was an insufferable jerk in the first half of his story. While he was still an ass in the second half, there was enough growth in him to warrant finishing his story.

I'm going to give Mitchell credit that he can write in any style he chooses, but I'm not sure about the choices he made here. Journals and letters, interviews and fireside storytelling, just don't work for me these days. The first two are dated. The latter two aren't strong enough to carry entire stories. One hundred page interviews require a recollection of minute details that only computers have, but apparently Sonmi did. Fireside storytelling for 70+ pages, especially in that dialect and without any back and forth conversation, is tiresome.

No, I haven't seen the movie, though that's probably less likely now. Maybe with the right direction and proper editing, these stories will reach their full potential.