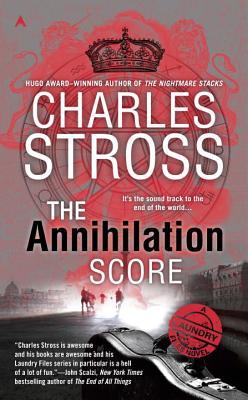 Unfortunately, one of those supernatural threats has come between Mo and Bob. An antique violin, an Erich Zahn original, made of white human bone, was designed to produce music capable of slaughtering demons. Mo is the custodian of this unholy instrument. It invades her dreams and yearns for the blood of her colleagues—and her husband. And despite Mo’s proficiency as a world-class violinist, it cannot be controlled…

When I first heard about a Laundry Files book featuring Mo, I was psyched. When narrating the other stories, Bob always said great things about her, particularly her kick ass-ery. She seemed like an under-utilized character in the series. But after reading some of the negative reviews, I decided to put off reading this one for a while. I went back and read all the short stories in the series that pre-dated this one. Reading those stories—happy tentacle times—put the series right, and I was finally ready to tackle this one.

The story picks up just before the climax of The Rhesus Chart (book #5) and reveals where and what Mo was doing at the time. It leads to the post-climactic standoff that ended book #5 from Mo's POV. Sadly, it seems that the pedestal that Bob placed Mo on was lovingly misguided. As the blurb indicates, Lecter, Mo's nickname for the white violin (a Lovecraft legacy), has inserted itself into the relationship. It haunts her dreams, teasing her that someday she'll be all his, body and soul. Primarily soul. It really wants Bob out of the picture. After a fight, whereupon it is clear that the violin is definitely playing Mo, Bob and Mo agree to a trial separation.

While there seems to be some will on behalf of both parties to work things out, work gets in the way. The death of Bob's boss has him traveling around the world putting out fires while Mo is tasked with starting up a new department (Transhuman Police Coordination Force) whose responsibility is to oversee the sudden uptick in people with superpowers (more on that in a minute). Most of the novel is taken up with Mo preparing for and attending meeting after meeting. There are so many meetings! Ugh! It couldn't get any more boring. There's no dramatic tension. At least with Bob, there's always the chance that the PowerPoint presentation will turn people into literal zombies rather than the figurative variety.

In giving voice to Mo, Stross has painted us a terribly unlikable person. It's a stressful time for both of them, but Mo lashes out at literally the one person she can confide in (break the oath, suffer debilitating pain) and seek solace against the nightmares they face at work. Rather than rehash what others have already said, I would ask you to consider reading the reviews from Will (he likens Mo to Bridget Jones), AMiL (calls attention to Mo's hypocrisy), and Torie (full on takedown) as they cover all the bases. The thing is, judging by a moment of introspection late in the novel, Stross did this on purpose. Mo has to sink to the bottom before she can bounce back. Stross risks alienating his readers with this course, and in this reader's opinion, it wasn't worth it.

Stross does a fine job explaining how superpowered people exist in the Laundryverse without violating the rules that he's established. I mean, I accept the logic of his argument, I just don't like it. I wasn't keen on the introduction of vampires (PHANGs in the bureaucratic vernacular) in the previous novel, but Stross made it work. I'm even less enthused about superheroes and supervillains. I enjoy the MCU, but I don't want them mixing in my Lovecraftian fiction.

Ultimately, the big reveal doesn't happen until the last forty pages or so. There were a few clues, but Mo never picked up on them as she was too self-absorbed with her problems and giddy over her new beau. I won't say that it was implausible—we live in strange times—but it was disappointingly short-sighted by those involved.

It's a character-driven novel; the story was secondary. The climax was more for Mo's personal growth than the plot. Slogging it out with her as she worked through everything had its moments, but they were too few and far between (MEETINGS!) and she was a difficult person to empathize with. It has been my experience that when people go through divorces, family and friends are often collateral damage. That's how I felt reading this book.