While en route to reunite Sir Robot IV (no longer a prince) with his son, the treeship has run out of fuel and makes an emergency stop on the war torn world of Phang. In previous issues, Phang has always been referred to as a terrible place. Sophie, who was a child when she was sold as a sex slave, was orphaned on Phang. Marko's unit had a rotation there. So it was with some trepidation that the ship touched down, though it was in a ruined city far from the front lines. They soon meet a tribe of simple meerkat-like people who lived among the ruins and spend the next six months taking care of them, making food for all these mouths greatly slows down the refueling process.

Sir Robot IV's emotional struggles return to the forefront. He projects his internal conflict upon Marko and Alana, hating them, yet admiring them on some level. He grows tired of the wait and plans on heading out to scout out a robot embassy for fuel. Isabel volunteers to go first to make sure the way is safe.

Petrichor, who took Klara's spot on the ship, maintains her vigilance. In many ways, she could be Marko's sister. She has all of Marko's mother's initial attitudes towards Marko and Alana yet remains protective of Hazel. It's as if Vaughn hit the reset button on Klara but took away the familial connection.

The Will continues to struggle with the loss of his girlfriend and his sister. Yeah, his story arc is tired as this "woe is me" crap has been going on since Volume 2. As bad as he was in Volume 6, he seems to find a new low. He goes in search of Gwendolyn and Sophie, who are working on a project that can bring the war on Phang to an end once and for all, in hopes that working with them again will help him get out of the gutter. Later, he encounters someone from his past that will hopefully do something to his storyline to make it less pathetic.

With The Will mostly incapacitated, a new freelancer has been hired to track down Alana, Marko, and Hazel. Alas, this person didn't make for a convincing character or villain. Nothing about this character seemed plausible, which is saying a lot considering the creativity employed thus far in this fantasy series. The character seemed more like a means to an end and wasn't properly thought out.

All of the past talk about Phang being such a terrible place was foreshadowing. Actual battle scenes are few, but terrible things happen.

Artwork continues to be excellent. While I really notice it in the color palette, the rendering of many a scene completely captures the emotions and thoughts of characters in events both mundane and charged. 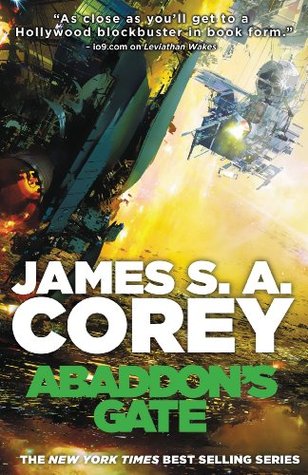 For generations, the solar system - Mars, the Moon, the Asteroid Belt - was humanity's great frontier. Until now. The alien artifact working through its program under the clouds of Venus has emerged to build a massive structure outside the orbit of Uranus: a gate that leads into a starless dark.

Jim Holden and the crew of the Rocinante are part of a vast flotilla of scientific and military ships going out to examine the artifact. But behind the scenes, a complex plot is unfolding, with the destruction of Holden at its core. As the emissaries of the human race try to find whether the gate is an opportunity or a threat, the greatest danger is the one they brought with them.

I have to say that I'm glad the TV series only spent half a season on this book and only really dealt with half of the material. I get to the midway point of this one and I'm like, "All the important stuff is done, so what's the next two hundred plus pages going to be about? Really? That's how we're going to spend our time. Ugh."

Pieces of the characters from the book were taken apart from the book and re-combined for the TV show. If you didn't like Ashford in the TV show, he's unbearable in the book. Far less depth to him, too. I didn't like the character of Melba/Clarissa in either the show or the book. Her character's story arc ended differently in the book, but I'm not 100% convinced by it, even after 547 pages. Anna was fine, seemed solid. Bull's character was chopped up into pieces and divvied among the TV show. His scenes would've been too expensive to film in the second half. I didn't mind him either, but didn't feel like he contributed much to the story other than providing another POV.

Overall, I'm calling this one a letdown. I didn't really care for any part of the storyline that didn't include the Ring. Too much filler with Melba/Clarissa's angst-filled storyline and details about the physical effects of sudden braking on the human body. Even the Rocinante crew storyline, which was focused on Melba/Clarissa's revenge plot and its aftermath, was more annoying than entertaining. Knock off a couple hundred pages from this book and it improves.

Book Review: Adulthood Is A Myth

I got this book for my daughter this Christmas. I'd checked out a couple of the cartoons and thought that it was a match for her. And, it seemed like I could read it, too, and then we could talk about it. Bonding with my daughter over a book. How cool is that?

It's a cute, quirky book full of daily comics about an introverted young woman's life and all that that entails. It covers the awkwardness of dating and dealing with people, the simple joy of curling up with a good book, the agonizing pain of conforming to social norms, and the mean-spirited whims of the menstrual cycle.

Being a fellow introvert, I could relate to a lot of the feelings Andersen tried to convey and actually chuckled out loud. It didn't matter that the character was easily less than half my age. And I understood the "girl stuff" humor just fine. It didn't matter that my biological hardware is different than hers. I'd recommend it to any dad whose daughter identifies in any way with this book.

My daughter has this book memorized. Last night, I'd give her the set up of one of my particular favorites, and she'd deliver the punchline. Now I'll have to buy the rest of the series. For her, of course. ;)