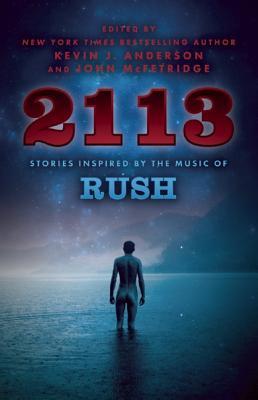 This anthology is a collection of "short stories inspired by the music of Rush." Having been an avid fan of the band since 1982, I've listened to each studio album in their discography dozens to hundreds of times. As such, I've generated my own imagery about what the lyrics and music are saying, so I went into this book with preconceived expectations.

As the subtitle to this book is "stories inspired by the music of Rush", one should pay attention to the "inspired by" part. I didn't. I was expecting literal interpretations of the songs. Most stories head off in a direction I would never have guessed. Plenty of times my reaction was, "Really? That's where you went with this song?" Now when the song is fairly vague on specifics, focusing on a theme of feelings in a situation (like Mercedes Lackey's "Into the Night", inspired by "Freeze"), there's far more leeway to generate a story.

But sometimes the stories are built from just one line in a song. These are typically the stories that take the most liberties, riding a tangent off into the fifth dimension. Yeah, creative license; I totally get that. But it wasn't what I was looking for. It worked in "Random Access Memory" by John McFetridge, but too often these stories were just so different that they would've worked better for me without the Rush reference.

Two of the eighteen stories in this anthology were actually the inspiration for Rush songs: "A Nice Morning Drive" by Richard S. Foster inspired "Red Barchetta" and "Gonna Roll the Bones" by Fritz Leiber inspired "Roll the Bones." While Neil's lyrics were faithful to Foster's story, he seems to have just used Leiber's story title as its content couldn't be much further removed the song.

Now that's not to say that the stories are bad. There are plenty of good stories here, and some of them, like "Day to Day" by Dayton Ward (inspired by "Red Sector A"), are faithful to the lyrics. If one doesn't go into this collection expecting every story to be a literal interpretation of the selected songs, one will appreciate this collection all the more.