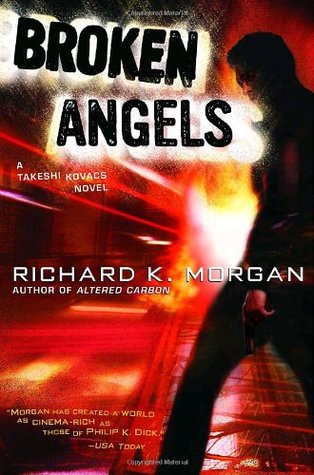 But when it comes to taking sides, the only one Kovacs is ever really on is his own. So when a rogue pilot and a sleazy corporate fat cat offer him a lucrative role in a treacherous treasure hunt, he’s only too happy to go AWOL with a band of resurrected soldiers of fortune. All that stands between them and the ancient alien spacecraft they mean to salvage are a massacred city bathed in deadly radiation, unleashed nanotechnology with a million ways to kill, and whatever surprises the highly advanced Martian race may have in store. But armed with his genetically engineered instincts, and his trusty twin Kalashnikovs, Takeshi is ready to take on anything—and let the devil take whoever’s left behind.

While Altered Carbon is a noir inspired mystery, Broken Angels is a treasure quest. Takeshi Kovacs, having had his sentence commuted after his success in the first novel, is now making a living as a mercenary on the war torn world of Sanction IV. His Envoy skills make him a valuable asset, and thus he is suited up in an enhanced sleeve—slang term for body, whether organic or artificial—with all sorts of neurological advances (thought controlled weapon interfaces) and biochemical additives (combat ready focus, situational awareness) that make him more lethal than ever. Despite his propensity for killing, we know from Altered Carbon that he's not a heartless monster. He has a code that he lives by, and it's pretty much what keeps him from falling into the abyss of soulless killing machine. He's no prig; he knows what he's doing. But even in war, there are lines that shouldn't be crossed.

All the carnage has added an extra layer of world weariness to his cynical mindset, so when he's offered a chance to go AWOL for a huge payout, he jumps at the chance. The prize is an ancient Martian spacecraft, floating in a remote location of the solar system, but only accessible through a teleportation gate. The only person who knows where the gate is and how to open it is archeologist Tanya Wardani, who's currently wasting away in a refugee camp. Envoys are more than elite soldiers; they're also skilled in the social sciences. Wardani has PTSD, and Kovacs has to work with her—primarily in VR as time can be sped up or slowed down as per the situation—to assist in her recovery.

The Martians were barely discussed in the first book. Basically they're the key to interstellar travel, even providing maps to inhabitable worlds in this corner of the galaxy. Much is still unknown about them, but their remnant technological artifacts are priceless. Archaeology has become a multi-billion dollar industry, despite the protests of actual scientists, and corporations fight over access to dig sites, hoping for the next big find that will yield a bonanza.

Mandrake, one of these corporations, is bankrolling this mission and profiting from the war. Matthias Hand is the executive representing Mandrake. He and Kovacs put together a team from a pile of purchased cortical stacks—the constructs which house the backup of everyone's consciousness, built like airplane black boxes—from the salvaged war dead. The recruitment process, which takes place entirely in VR, makes for a great introduction to each of the book's minor characters, and I found each of these interviews intriguing.

The team then heads to the site of the gate so that Wardani can get to work. There are a host of problems: The nearby city of Sauberville has been nuked, and radiation is slowly killing even these engineered sleeves; there's a saboteur in their midst; Hand's rivals have dropped a semi-intelligent lethal nanobot assembly nearby; and the only way out is guarded by Kovacs' former mercenary unit.

There are a couple sex scenes in the book that seemed gratuitous, especially as they didn't do much in the way of character development, but Morgan plants a clue to the identity of the saboteur in each scene that could easily be overlooked. Still, I have to wonder if they could've been handled differently.

The violence is graphic, but essential to the story. Morgan is emphasizing how terrible and dehumanizing war is. Sanction IV has become a corporate testing ground for the latest and greatest in military hardware. Human life is devalued so much that it becomes nothing more than a line item on a corporate balance sheet. Death is a form of slavery as soldiers become indebted to those who upload their stacks into new sleeves—at a price—and sent back to the front. The alternative is eternity in VR limbo. Stack death is the only true death.

Fortunately, the Martian ship proves to be more than just a MacGuffin. In fact, Morgan plays it up like a cross between a haunted house and Egyptian tomb. Morgan also ties it into the book's anti-war theme, but I won't spoil it for you.

All in all, I found Broken Angels to be a highly entertaining and engaging read, full of action, mystery, and the occasional philosophical debate on the nature of life, death, war, and spirituality. 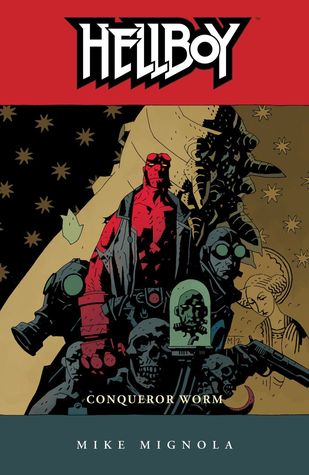 Part two of my Halloween read, and as good as part one was, this was even better.

This volume contains the one story and there's a lot to it. The Nazis are back, and one of their experiments from the war is coming to fruition sixty years later. Hellboy and the homunculus—they named it Roger—are sent to a spooky castle somewhere high up in the Austrian Alps where said experiment was conducted and thought to be destroyed by a military expedition led by some vigilante named Lobster Johnson. Much smashing occurs.

This collection has everything: poetry samples from Poe, Lovecraftian nightmares, restless spirits of the damned, hordes of ghoulish creations, undead minions, transmogrified soldiers, subterranean lairs with steampunk machinery, and a Nazi mad scientist. What else could you want?

Ok, there's more. Hellboy has his usual witty responses to the situations he stumbles into. It's his coping mechanism. Loyalty and trust are two of his strongest traits. He's expects underhanded behavior from strangers and outright villains, but the BPRD does something to royally piss him off, and he's forced to reconsider his relationship with them.

Roger the homunculus gets plenty of screen time. There's some self-reflection on what he is and how he fits into this modern world, centuries after his creation.

This is probably my favorite of the Hellboy volumes that I've read so far.