It's been several months since the events in Volume Three transpired. Alana is working as an actor for some kind of lame super hero soap opera, while Marko is a stay-at-home dad. Hazel is a rambunctious toddler. Marko's mom and Izabel the ghost nanny still live with them too. The whole situation is extremely stressful and putting a definite strain on their relationship. There are temptations which cloud their judgement and make them forget that they're a team. Kudos to Vaughn for bringing in an element of everyday life to the story.

Prince Robot IV is trying to find himself—more like he's losing himself—on the pleasure planet, Sextillion. Not only is he spoiled in the material sense, but in an emotional sense as well. Meanwhile, his wife has given birth to their son. We learn that not everyone on their world is as fortunate as the royal family, and the story takes on a decidedly dark turn.

The Will is still in the hospital, lost in a hallucinatory dreamscape. Gwendolyn and Sophie are out looking for a cure and run into The Brand, who is out seeking revenge for what happened to her brother. Not nearly enough Lying Cat in this issue!

There's the usual sex and graphic violence, but there's a birth mixed in with all the death. The artwork continues to be excellent, but here it's not so much about the fantastic elements as it is capturing the everyday and encapsulating a character's emotional state with just a single frame. 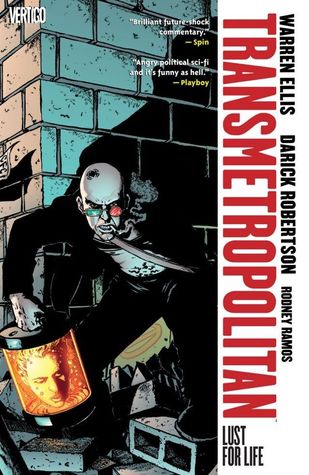 At this point in the series, Spider Jerusalem is fully settled in the city he hates, cranking out a column of acerbic wit and caustic insight each week. There are three standalone stories in this volume along with a three-part tale.

Building on the volume 1 tale of humans rewriting their DNA to make themselves alien, all of the stories explore some of the different pathways of the human condition in the 23rd century. In "Boyfriend Is a Virus," we learn that you can upload your consciousness into a computer whereupon it will then be downloaded into a nanobot dust cloud. "Another Cold Morning" reveals what happens to those cryogenically frozen heads from the 20th and 21st centuries. "Wild in the Country" reveals that there are "reservations" where one can live any lifestyle from history, a memory wipe removing any trace of your past modern life. Even in the "Freeze Me With Your Kiss" story arc, we encounter a group of people who wear hazmat suits 24/7, the Total Solitude Culture.

But "Freeze Me With Your Kiss" has more of a story to it. Spider's ex-wife's head, which is in a jar full of cryonic fluid, has been stolen, and he's being hunted down by groups wanting revenge for past wrongs. I suspect that this is an occupational hazard of his that we'll see more of in the future.

"Another Cold Morning" was my favorite of the bunch. It's the subject of one of Spider's columns and gets at his sense of injustice, revealing how lousy people are. Spider's compassion is on display, in his unique way, in "Boyfriend Is a Virus" as he tries to help Channon, his assistant, deal with her boyfriend's selfish life choice.