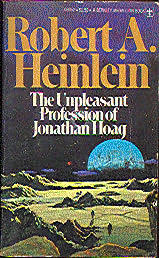 Six stories (five short, one novella) of Heinlein's that were published from 1941-59. I don't remember how it came to be in my possession, but it'd been on my nightstand for years. I got tired of looking at, so now seemed like a good time to read it.

My expectations were low, due to the publication dates of the stories. Typically, I've found that sci-fi doesn't age well. But I was pleasantly surprised by the overall quality. Only two of the stories really were sci-fi, though they all had speculative elements in them. Magic realism played more of a role in in the others. All of the stories would've made for solid Twilight Zone episodes.

The title track, a novella published in 1942, opens the book. Mr. Hoag can't remember what he does all day, so he hires a husband and wife private eye duo to figure it out. It was a surprisingly good mystery.

A widower recalls his salesman past, traveling the country with his wife in "The Man Who Traveled in Elephants" (1957). A bit shmaltzy.

"'—All You Zombies—'" (1959) is probably one of the strangest time travel stories that I've ever read. I can't say anything more without ruining it. Probably the best story in the bunch.

"They" (1941) is a tale of paranoia. Our unnamed protagonist thinks the whole world is a lie, a simulation meant to keep him preoccupied, from discovering some grand malevolent plot. Everyone is either a robot or one of the conspirators. Kinda predictable now, but maybe it wasn't back then.

"Our Fair City" (1948) is a whimsical tale of a reporter investigating corruption in the city's government with the help of his friend's domesticated dust devil.

An architect is looking for the next big thing in home design in "'—And He Built a Crooked House—'." Pretty speculative for its day (1941) as the architect tries to explain what a tesseract is to an investor.

Recommended for Heinlein completists, people who like Twilight Zone style stories, or those who either appreciate or are curious about the early days of speculative fiction.

A couple of years have passed since Volume 5. Marko and Alana have been searching for Hazel and Klara, not knowing where the surviving members of the Last Revolution cell took them. They finally discover their whereabouts and recognize that they're going to need the help of a frenemy if they're to have any hope of rescuing them.

Hazel and Klara have been in a Landfallian prison for non-combatants. Fortunately for Hazel, the prison has a school and the teacher actually cares about the well being of her students. At this point in the overall story, Hazel doesn't merely narrate the story, she's old enough to interact with the other characters. So we get not only the raw emotion and inquisitiveness of child Hazel, but also the older, seasoned Hazel reflecting back on that time in her life. I thought it was well done.

Meanwhile, the Will is out of the hospital, but one wouldn't say he's cured. Upset by the death of his sister and his ex-girlfriend, he resorts to drug use—a common theme in the Saga series—to cope. It's taken a toll on him both physically and mentally. Since leaving the hospital, he's been tracking down the man who killed his ex-girlfriend. Clearly, his progress is slow as his skills have been dulled by drugs and grief, but he eventually makes a discovery which threatens the lives of innocents.

And the reporters, whom we were introduced to in Volume 3, return to the scene. They haven't forgotten about Alana and Marko. Once the news of a certain character's death from Volume 5 makes it way to them, the investigation is on again.

One point that Vaughan has made in this series is that gender variation doesn't lead to stereotypes, bad or good. The reporters from Volume 3 are a gay couple, but their approach to their career is different. While the photographer is more inclined towards journalism shining a light on injustice, the writer is more egotistic, preferring to chase the big stories that'll grab them fame. There's also a transgendered Wreath woman in the prison who's just as racist towards the Landfallians as the cisgendered folk.

Staples' artwork is just as topnotch as ever. There were so many different settings for the story in this issue, yet each was uniquely rendered. The colors really make the scenes pop. Everything from realistic renditions of kindergarten artwork to intricate detail of a vault full of bureaucratic scrolls to the lush pastels of IV's hideaway world are great.

The volume opens with background on how recruiting for the war effort for both sides has evolved over time. As the war front shifted away from the two worlds, native recruitment waned. An all-volunteer army from home combined with aggressive outsourcing enabled many from Wreath and Landfall to become emotionally detached from the conflict. It was "over there" and not something to really think about.

It's been three months since the events that concluded volume four. Dengo, the mourning robot father who took Alana, Hazel, and Klara (Marko's mom) hostage, not to mention kidnapping Prince Robot IV's son, has decided that he needs help in elevating the status of his cause. So, he contacts "The Last Revolution," a resistance group whose methods make them seem more like terrorists. Dengo insists that they're merely trying to end the war. Meanwhile, Marko, Prince Robot IV, Yuma, and Ghüs are still out searching for them.

Marko confesses to Yuma that he's concerned about his penchant for violence. She tries to help him work through it by offering him some Fadeaway, the drug that Alana got hooked on in volume four. When asked where she got it, Yuma replied that she got it from a veteran. Marko is surprised, but she counters, "Honestly, you're probably one of the only vets who's not using." She went further, stating that Alana used it to try and find "peace." It's a window into another aspect of the suffering that the war has caused.

In the third storyline, Gwendolyn, The Brand, Sophie, Lying Cat, and Sweet Boy are still looking for a compound that can cure The Will. It dawned on me that I'd forgotten to point out that this storyline is actually a few years ahead of the others. Sophie had grown into a tween. In both this volume and the last, she resents being treated like a child and strives for the others to take her seriously. She asks questions of the Brand which seem a bit too adult for someone her age and takes risks that she isn't quite up to task in accomplishing. The Brand tries to find middle ground between treating her like a child and an adult.

Ultimately, these storylines are resolved in this volume—though not without consequences—and the stage is set for new storylines in the next volume.

The artwork continues to be outstanding, particularly the scenes on the impossible world of Demimonde. Coloring remains brilliant yet realistic. And while there's the usual scenes of sex and violence, there's a particularly nasty look at a dragon that rivals the troll balls from volume one. You have been warned. 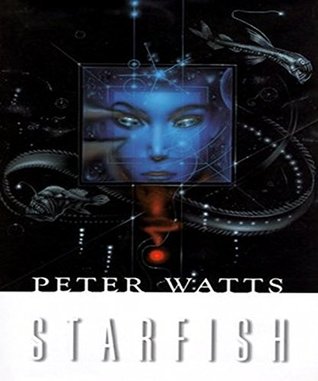 A huge international corporation has developed a facility along the Juan de Fuca Ridge at the bottom of the Pacific Ocean to exploit geothermal power. They send a bio-engineered crew—people who have been altered to withstand the pressure and breathe the seawater—down to live and work in this weird, fertile undersea darkness.

Unfortunately the only people suitable for long-term employment in these experimental power stations are crazy, some of them in unpleasant ways. How many of them can survive, or will be allowed to survive, while worldwide disaster approaches from below?

I wasn't sure what this novel wanted to be. It starts out with a character study of our protagonist, Lenie Clarke, as she adjusts to her surgically altered body and living on the ocean floor near a hydrothermal vent. Then it starts to turn into a bit of a soap opera as other damaged individuals are sent down to Beebe Station to work alongside her. Their personalities clash, people pair up, they argue over their treatment by "drybacks" with their jobs playing a background role. Finally, about 70% of the way through, the plot (the "worldwide disaster" referred to in the blurb) takes shape from a collection of scientific reports covering synthetic minds and ancient life.

Watts throws different POVs at us throughout the novel to advance the story. Unlike Clarke, who's there from beginning to end, these other characters come and go. I was surprised at first when the next character POV was introduced one-sixth of the way into the book. Thinking that he was going to be the counterpoint or pivotal in his relationship to Clarke, I was equally surprised when he was shuffled into the background at the one-third point. At first, I wondered what the point was in even having him in the first place, but reasons later revealed themselves in the story. And some of these other characters revealed elements of the overall story that Clarke wasn't privy to.

Can't say that I liked the post-climax ending. While I knew when I started this book that there were other books in the series, there was just a bit too much that was left unresolved. Viewed as a standalone, I don't believe it works. If Starfish is intended to be about Clarke's personal growth as she comes to work through the issues of her past (she's an abuse survivor), then I suppose that the worldwide disaster could be considered secondary. But her recovery is put on the backburner for the last third of the book while the plot is developed. Her dynamic change near the end is just too sudden. It almost seems like an afterthought. "Hmmm, gonna need more books to get the plot resolved. Better give Clarke an epiphany so I can end this phase of her story."

Still, I liked that Watts tackled several subjects and roped them together. Despite being twenty years old, the ideas presented here are still fresh. The real world internet could still wind up like the one postulated here. His radical approach to AI is untested and plausible. And given his background in biology, much of that aspect of the book is quite believable. The world-building is great. The descriptions of living at the bottom of the ocean splendid. Yes, it's a bleak story with little offered in the way of hope. Maybe that works for you; maybe it doesn't. If anything, it does a good job humanizing those whom society deems incorrigible or expendable.