The planet is called Banshee. The air is unbreathable, the water is poisonous. It is home to the most implacable enemies that humanity, in all its interstellar expansion, has ever encountered.

Body armor has been devised for the commando forces that are to be dropped on Banshee—the culmination of ten thousand years of the armorers’ craft. A trooper in this armor is a one-man, atomic powered battle fortress. But he will have to fight a nearly endless horde of berserk, hard-shelled monsters—the fighting arm of a species which uses biological technology to design perfect, mindless war minions.

Felix is a scout in A-team Two. Highly competent, he is the sole survivor of mission after mission. Yet he is a man consumed by fear and hatred. And he is protected, not only by his custom-fitted body armor, but by an odd being which seems to live within him, a cold killing machine he calls “The Engine.”

This is Felix’s story—a story of the horror, the courage, and the aftermath of combat, and the story, too, of how strength of spirit can be the greatest armor of all.

The story starts out with what you'd expect after reading the book blurb (Goodreads or paperback): a non-stop brutal assault. Felix is but one soldier of thousands dumped on Banshee, the alien homeworld, to fight the enemy on their turf. While not stated outright, they're treated as disposable heroes. Lessons are never learned. Tactics never change. Mistakes are repeated, sending the casualty count higher and higher. Published in 1984, I wonder if the hangover from Vietnam factored into Steakley's writing.

Felix's battles are epic, but there's no glory here. The "ants"—giant, mass-produced, mindless biological killing machines—relentlessly attack Felix and his fellow soldiers. Swarm after swarm come at them, and eventually, everyone dies. Except Felix. Steakley writes up Felix's battles in gory detail, which wears on the reader, but that's his point. He wants you to connect with Felix, who is physically and psychologically drained from all the killing, watching his comrades die, and being ordered to repeat the process over and over and over. It's madness, and it threatens to take Felix down with it. He's too afraid to live, but too angry to die.

But in the second part of the book, we shift from Felix to Jack Crow, interstellar celebrity rogue. He violently escapes from prison to a starship on a landing pad, only to be caught up with a group of mutineers. He's coerced into working with them in a scam to secure more fuel from a Fleet Scientific Colony. Jack is to use his celebrity status to his advantage to get the mutineers past the planet's defenses. Jack uses his reputation and charisma to gain audience and then presents a Trojan Horse of sorts to the project's chief scientist, Hollis Ware. Not only does it snare Hollis's curiosity, but Jack's too.

This second story takes over for quite a large chunk of the book, but Felix isn't forgotten. Steakley eventually weaves the two storylines together, and we learn more about what happened to Felix as well as his past before enlisting. Along the way, Steakley works on evolving Jack from selfish to selfless in a way that remained true to the character.

There are a few women characters of note in the book, and each is treated differently. Forest is a soldier just like Felix. She's fantastic: smart, brave, and skilled. Colonel Canada seemed like someone fresh out of college: book smart and eager, but not all that experienced. When she appears, it's like an episode of Spring Break: Banshee. Lya is a psychologist and Hollis's handler, not to mention very much in love with him. Karen is the Project Administrator and...wow. Let's just say that when we learn her backstory, it strikes a chord with the #metoo movement. All four impact either Felix or Jack in some way that shapes their worldview.

There's been a lot of comparison of this novel to Starship Troopers and The Forever War. Yes, there are big mean bugs that attacked Earth (ST), and there's a bleak outlook on the futility of war and those calling the shots (FW), but there are major differences. ST was more about patriotism and duty as Heinlein saw a moral decline in 1950s America. Armor rejects patriotism as an excuse for stupidity. FW was a mirror of Haldeman's experiences fighting in Vietnam and the difficulty returning to civilian life. Armor acknowledges it, but forges a different path, concerning itself with the toll taken on the human psyche.

There are some parts, including the ending, that beg for further story exploration. Sadly, Steakley died in 2010 from liver disease, having never completed a sequel.

Overall, a fantastic book (please ignore the typos) that worked for me on numerous levels. 5 stars. 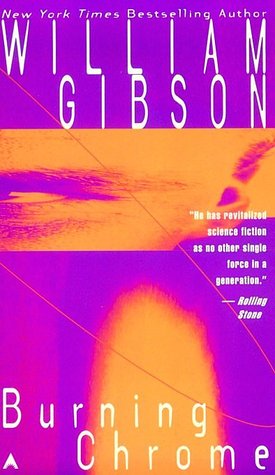 Newer editions have better covers. This was the 1987 cover, which is the one I own.

This is a short story collection of Gibson's early work, ranging from 1977-1985. In it, he lays the groundwork for his Sprawl trilogy, which includes Neuromancer, Count Zero, and Mona Lisa Overdrive. But more importantly, he gave sci-fi a much needed boost in the arm by securing the foundation of what would become known as cyberpunk.

One has to remember that during the time that Gibson wrote these stories, the internet was a domain limited to a select few militaries, government institutions, and universities. The web didn't even exist until 1991. But he saw the potential of where it could lead. While his biotech visions are just starting to show signs of emergence, by and large, he got his computer technology right.

First up is "Johnny Mnemonic." How a 22-page short story led to the movie of the same name is beyond me. It's like the studio cherry-picked several elements from the story that they liked and came up with something else entirely. This story is fine. It rushes by so fast, everything is lost in the world building. I had to re-read a couple of passages as the segues were easily overlooked.

The story was published in 1981, it helped define a cyberpunk future that fortunately hasn't come to pass, though some of the technological elements ring true. Though with the ubiquity of high-density, tiny storage devices (i.e. thumb drives), requiring someone to have wetware for a few megabytes of info is quaint. Tera- or Petabytes would've impressed.

"The Gernsback Continuum": While on assignment, a photographer starts hallucinating about a future that was forecast in the 1930s.

"Fragments of a Hologram Rose": Trying to put a broken heart back together with holograms in a ruined American landscape.

Gibson co-wrote "The Belonging Kind" with John Shirley. In this one, a socially awkward man is smitten by a woman at a bar. As he follows her through the city, he soon learns that she's more than she appears to be, which only makes her even more intriguing.

In "Hinterlands," humanity accidentally stumbles upon interstellar travel, but it's really rough on the people that experience it. There's a team at the L5 station that do their best to help those that come back. It's about as easy as putting a broken egg back together.

After cornering the oil market, the Soviet Union forced the US to concede human spaceflight in "Red Star, Winter Orbit", co-written with Bruce Sterling. Colonel Komarov, the first person on Mars, calls the Soviet space station home, but after two decades in space, it's also a prison. Returning to Earth's gravity would crush him, but that's exactly what the government wants.

"New Rose Hotel": Being a headhunter in the biotech market is a ruthless business. Like love, there's nothing that stings more than betrayal. Substitute thumb drives for diskettes and you'll be ok.

"The Winter Market": When dreams sell like popular music does today (or yesterday), it'll give rise to its own rock stars, complete with their own tragic stories.

In "Dogfight," co-written with Michael Swanwick, a loser drifter decides that he's going to make his mark by being the best holovideogame player in the whole podunk town, and he's willing to do anything to accomplish it, even if it means being a dick.

"Burning Chrome" wraps up this collection with the quintessential cyberpunk story: Two console jockeys set out for that one final score that'll make them rich. To do it, they'll need to take down a criminal kingpin via the internet matrix.

The first three stories are too obsessed with describing Gibson's world and throwing cool, new jargon at the reader than in crafting good stories. Style over substance. But after that, the real storytelling begins. Gibson eases off the nuevo lingo, particularly when writing with others, to develop the characters into people we can recognize beneath the veneer of tech. Definitely worth checking out to see a successful writer when he was still hungry and passionate about writing down his vision of the future.