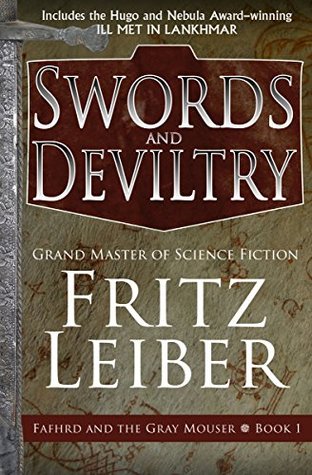 This book contains the origin stories for Fafhrd and the Grey Mouser, the popular pair of adventurers from the mind of Fritz Leiber.

"The Snow Women" is Fafhrd's story. He's all of 18 and it shows. Leiber captures all the raging hormones and misguided idealism of guys that age. Think of this as the barbarian equivalent of Alice Cooper's song "I'm Eighteen" (both were published in 1970 by the way). He has a hot girlfriend, Mara, who loves him dearly, but he's smitten by Vlana, a sultry actress who rides into town with a caravan of entertainers. He's confused. Tired of life in the snow-covered forest, he longs to see the civilized world. So far, his view of the world is as pillager as his tribe of "ice men" ransack towns along the coast as a way of life. Vlana represents his idea of civilization, and his attraction is dual. He wants to bang her, but his mind wants to learn more about the "civilized world" and what it has to offer.

Vlana struck me as being a few years older, if not in age then surely in mind. She knows how the world works and uses her beauty to her advantage. Fafhrd is an open book to her. His naivete about civilization is cute. While she isn't cruel to him, she does play him to her advantage.

Mara knows that Fafhrd lusts for Vlana. She doesn't buy the whole civilization line he tries to sell her. It pisses her off (rightly so!), and she's torn between kicking Fafhrd's ass and forgiving him.

The arrival of the caravan is an annual event organized by the men of the tribe. There are acting performances with musical accompaniment, but it's primarily striptease. The men are dogs and are dumb about barring the women from watching. The women of the tribe resent it. They've resorted to witchcraft and ice-laden snowballs to interfere with the show and wrest their husbands and sons away. It's gone on for so long that the grudge has festered. Fafhrd's mother, bitter from her husband's death while mountain climbing, is their leader. She's strong with the dark arts and continues to escalate the conflict. Fafhrd feels smothered by her. In turn, he feels like Mara is turning into his mother.

"The Unholy Grail" is the Grey Mouser's origin story. While serving as an apprentice to a wizard, he came to meet the local duke's daughter Ivrian. Love blossomed for a time, but Mouser knew of the duke's disdain for him and the wizard. He returned one day from an errand to find the wizard dead and his home burned. From here, the Mouser's tale becomes all about vengeance.

As for Ivrian, she's torn between helping Mouser and obeying her cruel father. He verbally abused her often, comparing Ivrian to her deceased mother and how drastically she fell short. It isn't pretty; and the emotional abuse has left Ivrian scarred and fearful of her father's wrath. There are few things worse for a child than to grow up with abusive parents, so criticism of Ivrian's alleged weakness should be tempered accordingly.

"Ill Met in Lankhmar" is where our two heroes' stories come together. Each is eyeing a group of thieves on their way back to the guild with a successful haul, but they're unaware of each other. As fate would have it, they simultaneously attack the thieves. But rather than fight over the spoils, they see something in the other that draws them together. They decide to celebrate their success and new found friendship by getting drunk and introducing the other to their girlfriends. But the Thieves' Guild isn't about to take this affront lying down.

I enjoyed Leiber's writing style. I think the bookgator said it best: "Reading these stories feels a little like sitting at the feet of an old, old storyteller while he reminisces about childhood heroes." And I couldn't agree more.