But it wasn't all bad

Lest I give you the wrong impression, my summer wasn't all work and no play. For instance, in July my wife and I got to see the Church perform at Darryl's House in Pawling, which is just over the border in New York.

While most people only remember them for their 80's hit "Under the Milky Way," they actually have twenty-five studio albums. A new one, Man Woman Life Death Infinity, has just been released. They remain one of my all-time favorite bands.

Despite the small size of the club, there was a VIP section (basically right in front of us). VIPs were treated to a meet & greet with the band. It was weird. We were separated from the VIP section by a bar rail, so we looked on as the band talked with VIP fans right next to us but we were forbidden. Kind of silly.

Towards the end of meet and greet period, Tim Powles, the drummer, was oblivious to the divider and, unbidden, came over to talk to us. When we informed him that we weren't VIP, he shrugged. I don't want to misquote him, so I'll just say that he didn't really care, having had enough pre-show wine. We were unprepared and scrambling for something to talk about. We noticed was that he was barefoot. Presto! Instant conversation starter. We pointed out their naked condition and wasn't he worried about stepping on something. He knew he probably should be, but he was more relaxed. I mentioned that one couldn't go too many place barefoot in the US due to liability issues. I asked if other places were as litigious as the US. He said, "No," with conviction.

We chatted with a little while longer, then let him go before he got in trouble with management (club or band). Nice guy.

The show was great. Old favorites dominated the set, with some newer tracks mixed in.

Every July our town hosts a small brewfest. This was the first time we had a chance to go. Normally it's one of the hottest weekends of the year. When the thermometer climbs into the 90s, the last thing I want to do is drink beer. But this year it was cloudy, drizzly, and cool enough to wear jeans. In fact, it's 78°F (25.5°C) today and I'm in shorts. You know the weather's gone weird in the northern hemisphere when an October day is warmer than a day in July. Anyway, it was pretty good. A few new local startup breweries (Nod Hill, Broken Symmetry) were present, which was nice to see.

Every year, the Newtown public library hosts a large book sale in one of the schools. My daughter and I got to go this year. Here's my haul: 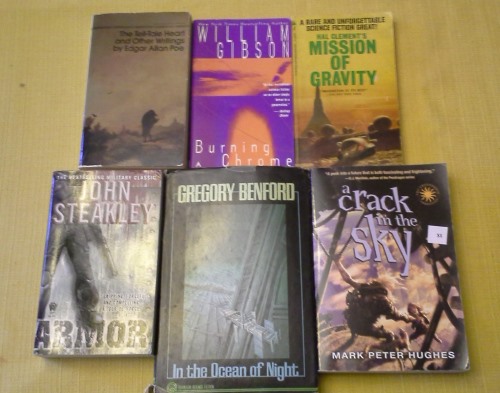 While I've always enjoyed perusing book stores (an activity all but extinct), I think this is the first time I've had a chance to go with my daughter. Yeah, she goes to the library, but that's always seemed to be satisfying some school requirement as opposed to reading because she enjoys it. It was a nice moment to connect with her over something we both enjoy.

But the highlight of the summer was witnessing the great North American eclipse of 2017! My parents live in the path of totality down in Tennessee, so we trekked on down to watch it from their front yard. The weather was perfect.

While I knew that the internet was going to be flooded with professional pictures and video, I just had to try and take some myself (Isn't that what people do?). I cut up one of the cheap (but Discover magazine approved) solar eclipse glasses and put one of the lenses in front of my phone camera lens. It didn't work very well. Most of the pictures were fuzzy blobs. This one was probably the best:

Obviously not good at all!

I waited until totality before I brought out my Olympus. I didn't want to risk damaging it (or my eyes) during the partial phase. I had much better results.

For these next four, I cropped the pictures so that I didn't have to re-size them. I think the pictures look better from a distance as the zooms reveal the limits of my camera.

This last picture is the same as the previous one, just zoomed out.

Venus made an appearance in the west once totality began, the reflected sunlight finally visible once the sky went dark. I didn't think to take a picture of it however.

If you've never seen a total solar eclipse in person, you should put it on your list of things to do. It was a sight to behold that my pictures don't do justice (or even the professional ones). It was like a hole in the sky, something physical yet completely dark. I understand why eclipses were viewed as ominous portents and signs from God (or the gods). For those two minutes and twenty seconds, it was as though a great secret had been revealed, but we all forgot just as soon as it was over.

I can't wait for the next one.