Like every other summer, I had my usual assortment of tasks: take the kids to their various summer camps (band camp, Irish dancing camp, sewing & embroidery class, field hockey, ice hockey), chop some wood for winter, and finish random small outdoor projects (like power wash and re-stain the deck). I got off to a good start by finishing a small retaining wall for a flower bed and collecting a couple of cords of wood from my in-laws (they had a couple of trees taken down). But while I was in the shower one day, my daughter answered the door for a guy going house to house to set up sales meetings for a home remodeling company.

I was a bit taken aback by this behavior of hers. She's 11; I thought she knew better. We went through a plague of Jehovah's Witness visits whereupon we hid and pretended we weren't home. But no. I get out of the shower and learn from my son that his sister is talking to a guy through her window. I scrambled to get dressed and send this guy on his way as nicely as possible, but once I went outside to talk to him, I was already caught in his net. When I explained that my wife wouldn't meet with anyone after work—her average arrival time home is 7—he countered with a weekend visit. The time was drawing near that I had to drive my overly friendly daughter to her Irish dancing class. I couldn't get rid of him without being a jerk so I gave up and agreed to a weekend meeting.

My wife and I were impressed by the sales presentation, so we took the plunge on vinyl siding with a side order of new (and bigger) gutters. We'd been wanting to go vinyl for several years, but opted not to make the huge investment. The materials technology has improved over the past decade. That and the company's size made me feel confident that we weren't going to have any issues down the road. And new gutters...I've been struggling with the ones we had since year one.

So this meant that I had a few weeks to split and stack the wood in the driveway. They needed the space for the materials and the ginormous dumpster—7 feet high! It was doable, but one week later, after we'd returned from "celebrating" the move, fate threw a wrench into our plans. A pipe burst in the bathroom on the ground floor, flooding most of the lower level. I opened the garage door on my way to the main shutoff valve, and a wave of water rolled out and down my driveway. While it was only a couple inches, anyone who's been flooded will tell you that it doesn't take much water to cause damage (I can imagine what Harvey's victims are going through). 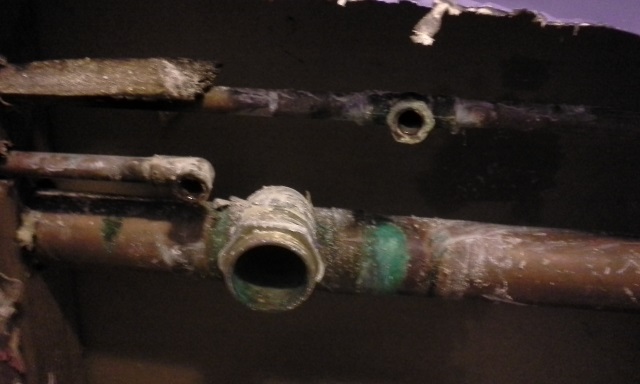 We pumped out as much water we could and used every non-bath towel in the house to absorb the rest. We thought that we were going to be ok. I left the dehumidifier on all night and hoped for the best. The next day we discovered that the wood parquet flooring in the foyer was trashed once and for all. The carpeting in the den was soggy. We tried the shop vac, but that was a joke. The padding underneath was a sponge and not letting go. It had to go. The more we ripped up, the more wet stuff we found. By the time we were done, half of the den and a quarter of the office was lost. We got to most furniture in time, but an old particle board shelf tower disintegrated.

Sheet rock is also notorious for disintegrating about immersion in water. If it doesn't crumble, that evil black mold grows on the surface. I had to rip out the bottom two feet of sheet rock in the bathroom and laundry room. The other rooms were spared as the carpet and padding sponginess worked in our favor, hogging the water to itself.

We kinda knew this day was coming. We've had water issues many times before. The guy who built our house in 1973 used the cheaper, thin-walled copper pipe meant to be used for re-circulating water heating systems. We have electric heat; so either he was an idiot or a cheapskate. 25+ years of hard and acidic water led to pinhole leaks and cracked pipes. As projects arose and pipes failed, we replaced the copper pipes throughout the house with PEX, except for the laundry room and downstairs bathroom. The pipe failed on the wrong side of the shutoff valve. It sheared right off, and at four gallons/minute (~15 liters/minute) it may well have been a fire hose.

I exposed the old copper pipes so that my plumber could get in there and make the swap. He also suggested getting our water tested so that we could get the proper water treatment system installed. We came in with a pH of 6.1 and a hardness of 154 ppm. That meant we had to install a water filter, neutralizer, and softener. It was a big expenditure on top of an already large investment, neither of which we'd planned on making.

Someone asked me if my insurance company was covering any of the cost. Honestly, I hadn't even considered it. So I decided to call my insurance agent and hear what they had to say. I was informed that the insurance company would cover the expense for the damaged flooring (minus the deductible) but not the corrective equipment we'd installed to get our water in line. After filing said claim, our rates would then go up as we'd lose our 20% discount for being claim free. Factoring the rate increase with the high deductible, we decided not to file a claim.

After I got this taken care of... 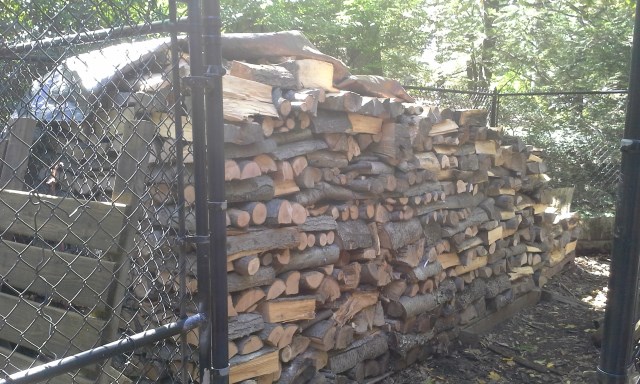 ...I got to work on repairs. All the sheet rock has been replaced, spackled, primed, and painted. Both the bathroom and laundry room are fully functional again. All of the foyer flooring and old carpet have been disposed of (Thank you, ginormous dumpster).

I still have half the old padding and all the tack strips to remove and dispose of. Since we have to replace the foyer flooring, we decided to completely renovate it. That's on my plate for September. After that, we'll have someone install carpet (That's beyond my skill set) in the den and office. So you can see that I won't have a whole lot of time for writing in the weeks ahead. All is not lost though. I did manage to find the time to write up this explanation for my whereabouts.

EDIT 9/14/17: Forgot to mention that our microwave oven died the week before the siding guys arrived. So that was yet another thing to buy and install.