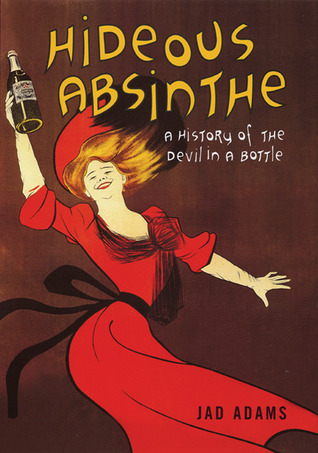 Adams has crafted a thoroughly researched tome that explores the history of absinthe use in society with emphasis on its peak use in the late nineteenth century. While it runs from ancient Egypt's medicinal uses up to today's connoisseurs on the web, the focus of the book is on its peak usage period from mid-19th century Europe to its eventual banning in the early 20th century.

I'd heard about absinthe some thirty years ago, and its purported mind-altering effects were the stuff of urban legend. When something is banned, all people have to go by are tall tales meant to keep a firm grip on the listener's attention. Adams explores that aspect. How much of absinthe's legend is true; how much is hype? He focuses on the poets and painters who were associated with absinthe. He goes into great detail about the lives of famous artists (Van Gogh, Gaugin, Verlaine, Degas, Dowson, Wilde, etc.) to determine how much of their work's success, moral shortcomings, and health failures can be attributed to "the green fairy." In fact, he goes into so much detail that I feel he got sidetracked. The book becomes less about absinthe and more a study of the Decadent Movement and its propensity for creating alcoholics.

After absinthe becomes a victim of its own hype, the narrative rushes to modern day. Contemporary accounts note that absinthe tastes like crap, and Adams barely questions why that may be. A few scientific accounts are brought up, but it seems that biochemical analysis was a bit lacking at the time of publication. We know that thujone is the active ingredient in wormwood oil that gives absinthe its claim to mind-altering fame, but there doesn't seem to be any consensus on anything other than toxicity levels. As for why its taste doesn't hold up? We're met with a shrug, which isn't a great way to end a book.